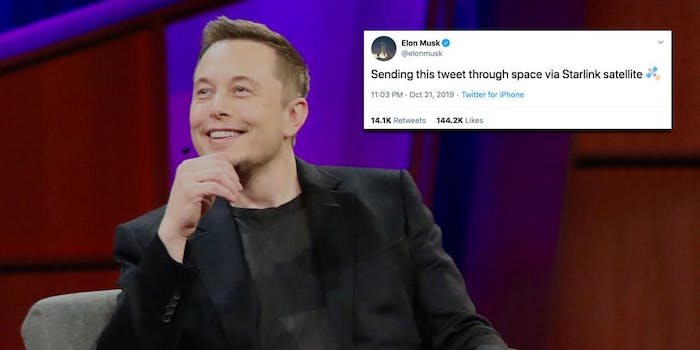 The SpaceX CEO connected to the internet through the company's satellite constellation.

SpaceX CEO Elon Musk sent out a tweet early Tuesday that was made possible by his company’s Starlink satellite constellation.

The satellites are part of SpaceX‘s plan to bring broadband connectivity to people all over the world and are what provided Musk with the internet connection necessary to send the message.

The entrepreneur himself also appeared to be shocked that the tweet had worked.

Although SpaceX originally intended to put 12,000 satellites into orbit, the company signaled earlier this month that it is now aiming to send up an additional 30,000 satellites.

SpaceX is hoping that the vast number of satellites will ensure that it can meet the demand for internet access in remote areas all across the globe.

Reaching that high of a number could take considerable time though. The company only just sent up its first 60 satellites in May after experimenting with a small number of test satellites a year ago.

Satellite-based internet is just a small part of the company’s plans. SpaceX says its ultimate goal is to create space technology that will allow humans “to live on other planets.” The company’s lead engineers recently confirmed that SpaceX is working on building cities on Mars and the Moon. “The Starship system opens up capabilities, for example, to deliver very large payloads to the moon, set up and operate lunar bases,” lead engineer Paul Wooster recently said at a conference. At the same event, SpaceX said it is targeting for its first city on Mars to be completed by 2050.