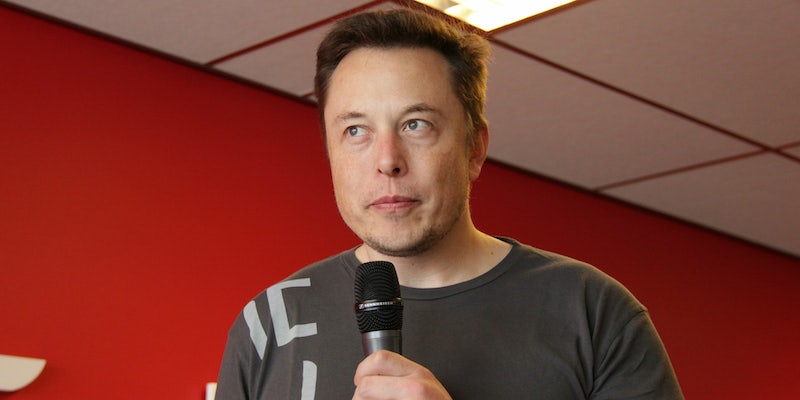 The Tesla CEO is in hot water again.

Tesla CEO Elon Musk seems to have gotten himself into hot water again thanks to his activity on Twitter. During the Thai cave rescue this summer, one diver criticized Musk’s aid efforts, and Musk called the diver a “pedo” in retort. Musk may be facing a civil suit for his statements.

In July, diver Vernon Unsworth got the brunt of Musk’s frustrations following criticism of his cave dive rescue efforts. Musk and a team of engineers had developed and transported a miniature submarine that was ultimately rejected by those in charge of rescue efforts. In one interview, Unsworth spoke unfavorably of the submarine and called it a PR stunt. In subsequent conversations on Twitter, Musk referred to Unsworth as “pedo guy,” multiple times, for no clear reason. Shortly after, Unsworth said that he would consider taking legal action against the defamatory statements. Musk eventually deleted the tweets.

Fast forward more than a month, and a critic on Twitter brought Musk’s unfounded pedo statements up again. Musk seemed to believe that he was in the clear for his behavior.

You don’t think it’s strange he hasn’t sued me? He was offered free legal services. And you call yourself @yoda …

It looks like that isn’t the case after all. Unsworth did seek legal counsel and is preparing a libel case against Musk.

@elonmusk should check his mail before tweeting. pic.twitter.com/3c9QWtdp25

“You published through three different tweets to your twenty-two million followers that Mr. Unsworth engages in the sexual exploitation of Thai children, and you did so at a time when he was working to save the lives of twelve Thai children,” Unsworth’s lawyer L. Lin Wood, a defamation expert, wrote in a letter to Musk, which he tweeted a copy of early Wednesday. Wood continued that Musk tweeted this comment “without any basis,” and according to a subsequent tweet, he “did so out of anger.”

When reached for comment by BuzzFeed News, Musk did not mention the letter. He asked “Have you actually done any research at all? For example, you incorrectly state that he is a diver, which shows that you know essentially nothing and have not even bothered to research basic facts.”

In fact, Unsworth is a British caver and experienced diver who had participated in several cave rescue efforts in the U.K. prior to the Thai mission. Unsworth lived near the caves, and between his advice and the U.K. experts he called upon, the 12 boys and their coach were successfully rescued despite the challenging conditions.