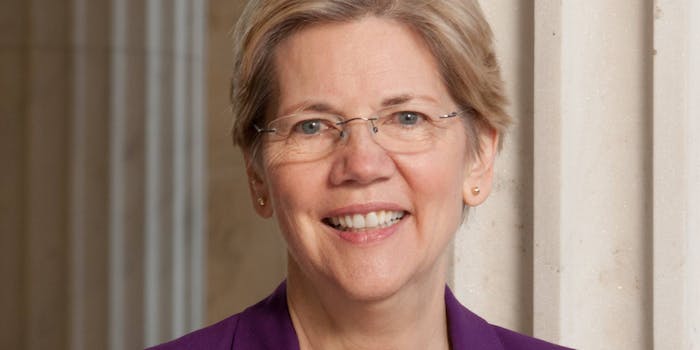 Are you listening, Hillary?

Kids today, with their spicy memes and their complicated shoes, what do they even want?

A Yik Yak spokesperson told the Daily Dot this is the first time the service has polled on Warren, so it’s difficult to get a sense if Warren’s stock is rising overall in terms of the Democratic veepstakes. However, it’s notable that Warren has a significantly larger share of support on the Democratic side than any single candidate on the GOP end.

While one poll from the Pew Research Center puts Trump in third place, behind the Libertarian presidential candidate, former New Mexico Gov. Gary Johnson, Clinton may want to pay heed to the wishes of Yik Yak’s millennial democratic if she wants to win votes.

Millennials may have overtaken Baby Boomers as the single largest share of the electorate earlier this year, but whether they’ll play a decisive role in November remains to be seen.

During the 2012 election cycle, only 46 percent of eligible millennial voters actually turned out to the polls. Turnout levels for older age cohorts, from Gen X to the Greatest Generation, were more than sixty percent. Four years earlier, amid the excitement surrounding then-Sen. Barack Obama‘s historic candidacy, millennial turnout was slightly higher.

Even then, it didn’t make it over 50 percent.