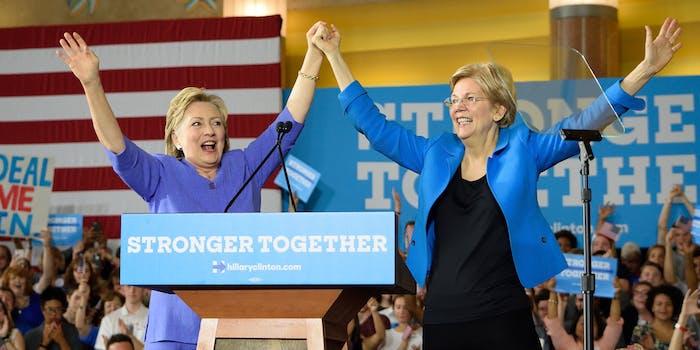 Massachusetts Sen. Elizabeth Warren had choice words for Donald Trump, the Republican nominee, during a campaign appearance on Monday.

“Get this, Donald—nasty women are tough,” said Warren, campaigning alongside Democratic nominee Hillary Clinton in New Hampshire. “Nasty women are smart. And nasty women vote. And on Nov. 8, we nasty women are going to march our nasty feet to cast our nasty votes to get you out of our lives forever.”

Warren’s repetitious use of the word “nasty” is a reference to the Oct. 19 presidential debate during which Trump interrupted Clinton to call her a “such a nasty woman.”

Trump’s remarks certainly didn’t do his campaign any favors. A post-debate poll released by ABC News on Sunday shows Clinton leading 55 percent to 35 percent over Trump among women.

Over the weekend, singer Katy Perry reportedly wore a “Nasty Woman” T-shirt while canvassing for Clinton at the University of Nevada.