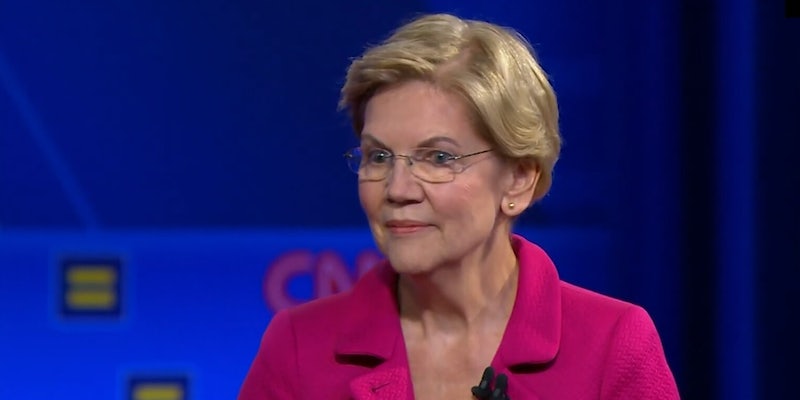 A lot of people online loved her joke response.

Democratic 2020 hopeful Sen. Elizabeth Warren (D-Mass.) drew applause on Thursday night after responding to a hypothetical question about people who oppose same-sex marriage, saying she would tell that person “just marry one woman… assuming you can find one.”

Warren made the quip during an LGBTQ town hall event hosted by CNN on Thursday night.

During the event, Warren was asked: “Let’s say you’re on the campaign trail and a supporter approaches you and says ‘senator, I’m old fashioned and my faith teaches me that marriage is between one man and one woman.’ What is your response?”

“Well, I’m going to assume it’s a guy who said that,” she said, continuing: “And I’m going to say ‘then just marry one woman.’ I’m cool with that.”

Warren, after a pause, added:

The response drew loud applause from the crowd—and from many people online.

Just when you think I couldn't love Elizabeth Warren any more. "Assuming you can find one" STUNNING. Drag of the century. https://t.co/OdfRNXaoV9

— Aaron, Explainer of All. Understander of Nothing. (@azexplainsitall) October 11, 2019

“Assuming you can find one.” – Sen. Elizabeth Warren

THE SHADE!! Love it. #EqualityTownHall

Warren has seen an uptick in popularity in recent months as she seeks to secure the party’s nomination for the 2020 presidential election. According to Real Clear Politics, which tracks a number of different polls, Warren trails former Vice President Joe Biden by only 1.8 points.