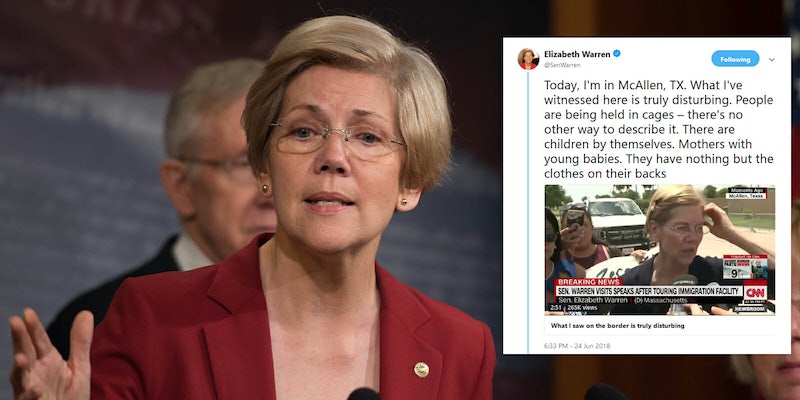 She also said there was not a 'reunification process' at a center.

Sen. Elizabeth Warren (D-Mass.) called a immigration facility in Texas a “disturbing picture” after she toured one on Sunday.

Speaking after a tour at a center in McAllen, Texas, Warren said she saw “children by themselves,” describing the conditions she says undocumented immigrant children and their families are being held in.

“They’re all on concrete floors in cages, there’s just no other way to describe it,” she said. “They are big chain-link cages on cold concrete floors and metal blankets handed out to people. People are all just waiting and frightened.”

Today, I'm in McAllen, TX. What I've witnessed here is truly disturbing. People are being held in cages – there's no other way to describe it. There are children by themselves. Mothers with young babies. They have nothing but the clothes on their backs pic.twitter.com/1VuVdLa42T

The Massachusetts senator–and much-speculated 2020 Democratic presidential candidate–said she spoke with individual undocumented immigrants who told them of hardships they faced in countries they came from, many fleeing from violence.

In the past several weeks a chorus of criticism has been levied against President Donald Trump‘s administration for a enforcing a “zero tolerance” immigration policy that separated undocumented children from their families at various centers along the southern border of the country.

The Washington Post reports that Warren said she did not see evidence of reunification processes taking place during her recent visit, where she spoke with several women.

You can read more about Warren’s comments in the Washington Post‘s report here.