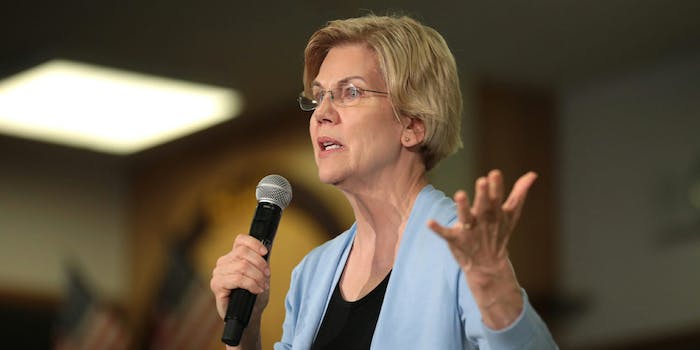 Elizabeth Warren calls for a ban on private prisons

The plan is the latest in a number of policy proposals the senator has posted on Medium.

“There should be no place in America for profiting off putting more people behind bars or in detention,” Warren, who is among a wide field of Democrats vying for the 2020 Democratic candidacy for president, wrote.

Warren said she would ban private prisons and detention facilities by ending contracts that the government has with private providers. She added that she would extend the ban to states and localities “by conditioning their receipt of federal public safety funding on their use of public facilities.”

The senator’s plan also included ending the ability for companies to charge for “basic services” like phone calls, healthcare, and bank transfers within prisons.

In addition, Warren called for the creation of an independent Prison Conditions Monitor in the Justice Department’s Inspector General office to set standards and audit contractors.

“Washington hands billions over to corporations profiting off of inhumane detention and incarceration policies while ignoring the families that are destroyed in the process,” she wrote. “We need to call that out for what it is: corruption. Incarcerating and detaining millions for profit doesn’t keep us safe. It’s time to do better.”