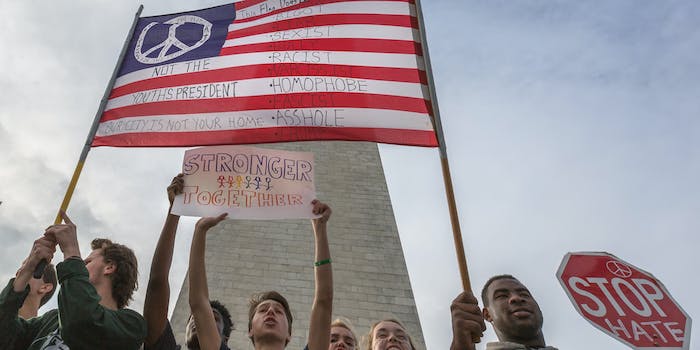 She clearly wasn't talking about the Washington Monument.

Conservatives are falsely accusing an Egyptologist of offering advice on toppling the Washington Monument.

As protests over racism and violence towards Blacks—sparked by the death of George Floyd at the hands of police—continued across the nation last night, Egyptologist Sarah Parcak tweeted an “entirely hypothetical” how-to thread on toppling an obelisk.

“PSA For ANYONE who might be interested in how to pull down an obelisk* safely from an Egyptologist who never ever in a million years thought this advice might come in handy,” Parcak tweeted, adding, “*might be masquerading as a racist monument I dunno.”

Parcak’s described method involves a group of people—she estimates 40+ for every 10 feet of monument—using chains or ropes to seesaw the monument back and forth until it falls.

Later in the thread, Parcak implies that she’s specifically referring to a Confederate monument in Birmingham, Alabama.

Parcak also asked people not to tear down the Washington Monument, the most famous obelisk in the country. She reiterated that this morning.

Nevertheless, conservatives are convinced that the Parcak was encouraging people to tear down the Washington Monument. Their outrage, however misguided, was palpable.

“This is a college professor who is instructing on how to bring down the Washington Monument,” tweeted Carmine Sabia. “This is the scum that is using the murder of George Floyd to justify their anarchy.”

In the rush to declare Parcak a terrorist or something, right-wing Twitter appears not to have accessed much, if any, of their cerebrum.

Students of history, or Google, would note that the monument has nothing to do with the Confederacy, as it was established in 1848, before the Confederacy existed, and honors the nation’s first president, George Washington.

Further, anyone who has seen the Washington Monument or understands math would immediately realize that it is effectively impossible to pull down by hand, as Parcak describes. It’s 555 feet tall and weighs roughly 90,000 tons or 180 million pounds.

There is, however, also an obelisk celebrating Jefferson Davis, the president of the Confederacy, in Kentucky.

Many were amused by the egregious misconception.

City University of New York Professor Angus Johnston tweeted incredulously, “There’s a zillion people on Twitter, including a bunch of high-profile conservative blue-checks, who think this thread is practical advice for toppling the Washington Monument.”

It does bear mention that a group of people did try to topple the Confederate statue in Birmingham using what appeared to be Parcak’s method. They were ultimately unsuccessful.