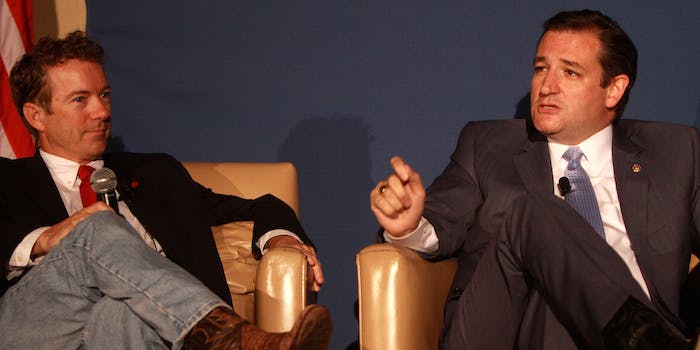 Ted Cruz, Rick Santorum, and Rand Paul are among the recipients.

The leader of a right-wing group cited by suspected Charleston shooter Dylann Roof in his alleged manifesto has donated tens of thousands of dollars to Republicans candidates, reports the Guardian.

According to the manifesto attributed to Roof, the alleged 21-year-old shooter discovered the CCC’s website after reading a Wikipedia article about the case of George Zimmerman, who killed 17-year-old Trayvon Martin in 2012. As of Sunday, the CCC’s website was offline.

“The CofCC is hardly responsible for the actions of this deranged individual merely because he gleaned accurate information from our website.”

The organization, according to the Southern Poverty Law Center, “is the modern reincarnation of the old White Citizens Councils, which were formed in the 1950s and 1960s to battle school desegregation in the South.” Due to a “veneer of civic respectability,” the future Supreme Court Justice Thurgood Marshall referred to the groups as the “uptown Klan,” referencing the Ku Klux Klan.

In a statement on Sunday, Holt wrote it is “not surprising” that Roof had credited his website. “The CofCC is hardly responsible for the actions of this deranged individual merely because he gleaned accurate information from our website,” Holt said.

Roof was arrested on June 18 after a 14-hour manhunt. A surveillance camera allegedly captured him entering the Emanuel African Methodist Episcopal (AME) Church in Charleston, South Carolina, the night before. Survivors of the shooting say he sat with the church’s bible study group for nearly an hour before opening fire. Nine people were killed, including the pastor, Clementa Pinckney.

Holt’s online activities have been closely scrutinized since Roof’s alleged manifesto was made public. Numerous racist remarks attributed to the username Earl P Holt III were discovered on the conservative news website The Blaze. In one comment, dated April 2012, the user with Holt’s name asked other users about acquiring “180 grain .308 NATO rounds with a polymer tip,” referring to a powerful type of ammunition.

An associate of Holt’s told the Guardian: “If there’s a statement that is ‘Earl P Holt III’, he probably made it.”