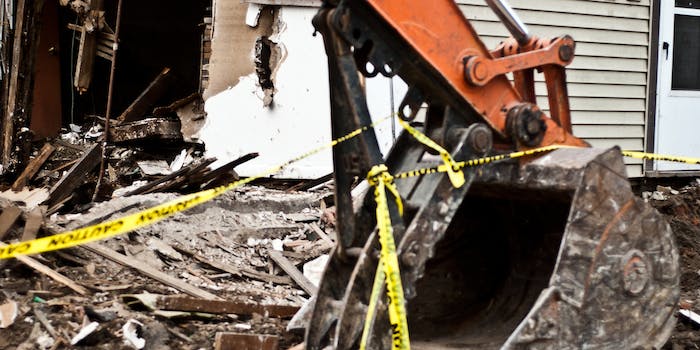 The owners of a duplex in Rowlett, Texas, are without a home after a demolition company accidentally tore down their house on Tuesday.

The area had been ravaged by tornadoes around Christmastime, damaging many houses in the area. Lindsay Diaz and Alan Cutter, who owned the duplex at 7601 and 7603 Calypso Drive, were damaged by the tornadoes, but their home was fixable. They had been waiting for insurance as well as assistance from FEMA for repairs.

At least, that’s until they pulled up and found that a demolition company tore down the duplex without warning.

Billy L. Nabors Demolition, the company that knocked down the duplex, had been hired to tear down a home in Rowlett. However, the house was located at 7601 Cousteau Drive, a block away from the duplex Diaz and Cutter owned.

“How do you make a mistake like this?” Diaz told WFAA. “I mean, this is just the worst.”

The demolition company would only say that the incident was under investigation and refused to clarify if it had made a mistake. However, an employee sent images of Google Maps to the owners indicating that the pin for 7601 Cousteau Drive was placed on the duplex Diaz and Cutter owned a block away. According to Engadget, Apple Maps and Mapquest both correctly identify both houses while Google Maps still shows the markers for both addresses falling on 7601 Calypso Drive.

“These two addresses probably shouldn’t point to the same house, especially if one of those houses is scheduled to be destroyed,” a comment marked on Google Maps reads.

Talk about an understatement.