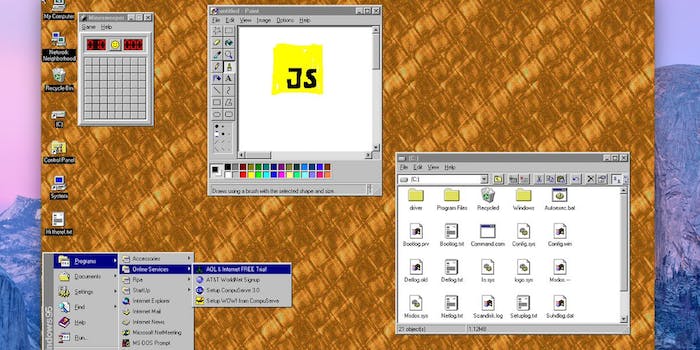 You can download Windows 95 and play it as an app

Take a trip down memory lane with a download of the OS you grew up with.

In a strange twist of fate—or more accurately, a striking example of how far technology has progressed in the past two decades—you can now “play” an entire desktop operating system as an app. That’s right: You can download Windows 95 and play it as an app on Windows, Mac, and Linux computers.

Slack developer Felix Rieseberg built the app, which you can download on Github here. The download is essentially a full version of Windows 95, with a few caveats. The build features a functional desktop, Start menu, and settings menu and—the best part—it can run classic games and programs such as MS Paint, Minesweeper, Solitaire, and Notepad. Other third-party and Microsoft-developed games aren’t functional, however. You also can’t access the internet via Internet Explorer in this sandboxed emulation. (This may be for the best, however, as a 1995-era browser would be entirely incapable of loading 2018-era webpages.)

This app version of Windows 95 also generally doesn’t have network or file access, as that could pose a security threat to your computer.

However, since its initial debut, Rieseberg has been fielding “support requests” on Twitter and has integrated additional functionality into the download. For example, v1.1 includes floppy disk support and v1.2 includes details like being able to see the CPU and hard disk at work.

If you’re in need of some nostalgia, or just have some time to kill and want to explore an OS from the days of yore, Rieseberg seems to have developed the perfect solution.

The app also isn’t a tremendous-sized download: it’s only 129 MB in size. That’s smaller than the most recent version of Angry Birds on iOS (159.6 MB) and far smaller than a download of Fortnite (9.5 GB).

For a reminder of exactly how old this OS is, Windows 95 recently celebrated its 23rd birthday on Aug. 24.