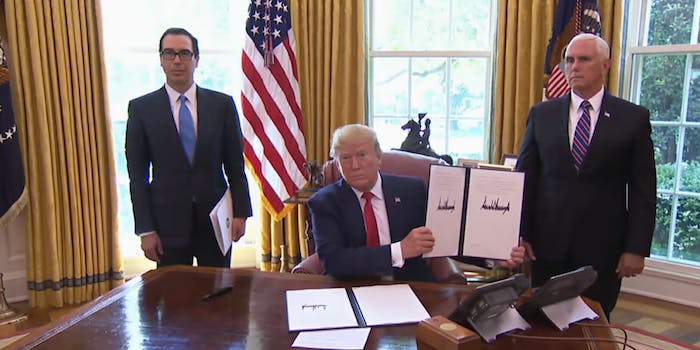 The mistake was quickly mocked by people on Twitter.

President Donald Trump said the name of a long-dead Iranian ayatollah when announcing a new round of sanctions against the country on Monday.

Trump, speaking in the Oval Office, said the assets of “Ayatollah Khomeini” would not “be spared from the sanctions.” However, Khomeini died in 1989.

He was succeeded by Iran’s current leader Ayatollah Khamenei.

“Sanctions imposed through the executive order that I’m about to sign will deny the Supreme Leader and the Supreme Leader’s Office, and those closely affiliated with him and the office, access to key financial resources and support. The assets of Ayatollah Khomeini and his office will not be spared from the sanctions,” Trump said.

Iran, according to the Associated Press, called the sanctions “outrageous and idiotic.” The sanctions come after a U.S. drone was shot down last week by Iran.

Trump’s ayatollah mistake was given the frisking it deserves on Twitter.

I had to see why Ayatollah Khomeini was trending. Because, of course, I did. pic.twitter.com/NHKzIP91Zc

Trump specifying that "the assets of Ayatollah Khomeini will not be spared from the sanctions" raises some serious questions about whether he even knows who the Supreme Leader of Iran is https://t.co/xzJLfNVys3

Ayatollah Khomeini is trending because Trump is a moron. Helluva time to be alive. I look forward to the missile strikes against the Iron Sheik. He will retaliate with the Camel Clutch offensive.

Me, an idiot: “You just sanctioned Ayatollah Khomeini? He died in 1989”

Trump, a stable genius: “Good! That shows the sanction is working” https://t.co/POrXzjKmfd