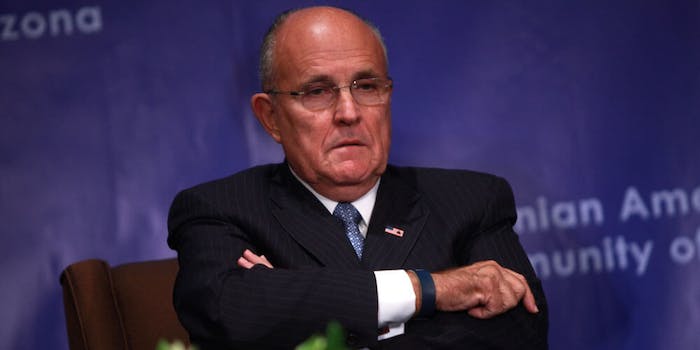 Giuliani had to be assisted by the Apple Store after entering the incorrect passcode at least 10 times.

Rudy Giuliani reportedly locked himself out of his iPhone just weeks after being named cybersecurity adviser to President Donald Trump, NBC News reports.

An internal Apple store memo obtained by NBC News indicates that in 2017 the former New York City mayor took his device to an Apple Store location in San Francisco after forgetting his own passcode.

Giuliani is said to have locked himself out of his iPhone after entering the incorrect passcode at least 10 times.

The device, an out-of-warranty iPhone 6, had to be wiped. Some of Giuliani’s data was then restored using his iCloud backup.

A former Apple employee who worked at the store at the time described Giuliani’s actions as “very sloppy.”

“Trump had just named him as an informal adviser on cybersecurity and here, he couldn’t even master the fundamentals of securing your own device,” the employee said.

But getting locked out of his phone while advising the president on cybersecurity wasn’t the only issue.

E.J. Hilbert, a former FBI agent who focused on cybercrime, noted the inherent danger in such a high-profile figure handing over their device to a random Apple employee.

“There’s no way he should be going to a commercial location to ask for that assistance,” Hilbert said.

Experts argue that Giuliani instead should have taken his phone to White House staffers who are cleared to assist with such technical issues.

The incident, unfortunately, is unsurprising given Giuliani’s digital track record.

Just last week, Giuliani butt-dialed an NBC reporter two times and inadvertently left messages in which he discussed needing cash and his disdain for the Biden family.

Giuliani also made headlines after becoming the White House cybersecurity adviser when it was discovered that the website for his security firm was filled with vulnerabilities.

And to make matters worse, a typo made by Giuliani on Twitter in 2017 led the political figure to accuse the social media platform of “invading my text,” showcasing yet again his failure to understand the most basic aspects of the internet.