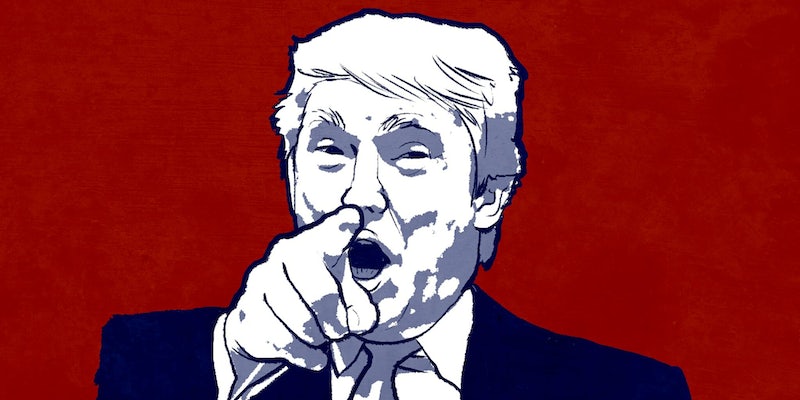 'I guess he doesn't know about the First Amendment.'

Donald Trump‘s campaign requires volunteers to sign a contract that forbids them from criticizing the Republican presidential candidate, his family members, any Trump businesses or products, or his campaign. The six-page contract, reviewed in full by the Daily Dot, theoretically lasts for the entirety of a volunteer’s life.

Legal experts say, however, that the contract’s non-disparagement clause would likely never hold up in court.

The tight control of volunteers stands in stark contrast to not only American political-campaign norms but also Trump’s reputation for speaking his mind.

The contract first came to light late last week after Trump campaign emails indicated that some prospective volunteers were required to sign a non-disclosure agreement in order to make calls for the campaign from Trump Tower in Manhattan.

“I don’t see how a court enforces this.”

It wasn’t until Monday that the contracts were unveiled to prospective volunteers at Trump Tower. A Daily Dot review of the contract found that the document extends beyond the non-disclosure agreement that was originally reported.

In addition to forbidding volunteers from disparaging Trump, the contract also includes a sentence that demands volunteers prevent their employees from criticizing Trump, thus making volunteers responsible for the free speech of others for an indeterminate amount of time.

“I guess he doesn’t know about the First Amendment,” Davida Perry, an employment lawyer in New York City, told the Daily Dot. “This is really shocking.”

Non-disparagement, non-disclosure, and non-compete agreements—which are all found in Trump’s contract—are common in business contracts, but they apply to employees, not volunteers who receive no compensation for their time and work.

Because volunteers give up their rights but get nothing in return, the contract is likely legally unenforceable, professor Samuel Estreicher, who directs the labor program at NYU Law School, told NBC News.

The Trump campaign could risk a lawsuit by forcing volunteers to give up so much without treating them as employees, Jeanne Christensen, an employment lawyer at Wigdor LLP, told NBC.

The contract extends down to the lowest levels of the Trump campaign, including at call centers, where people spend hours making phone calls to convince other citizens to vote for Trump.

2. No Disparagement. During the term of your service and at all times thereafter you hereby promise and agree not to demean or disparage publicly the Company, Mr. Trump, any Trump Company, any Family Member, or any Family Member Company or any asset any of the foregoing own, or product or service any of the foregoing offer, in each case by or in any of the Restricted Means and Contexts and to prevent your employees from doing so.

3. No Competitive Services. Until the Non-Compete Cutoff Date you promise and agree not to assist or counsel, directly or indirectly, for compensation or as a volunteer, any person that is a candidate or exploring candidacy for President of the United States other than Mr. Trump and to prevent your employees from doing so.

Volunteers also sign a non-disclosure agreement, forbidding them from sharing any sensitive information from the campaign. What kind of information is sensitive or confidential is completely at Trump’s discretion, according to the contract.

“He’s apparently so afraid that people would say something bad about him after spending some time on his campaign that they have to sign some sort of agreement,” Perry explained. “I don’t see how this stands up. I don’t see how a court enforces this.”

Volunteers must also sign a non-compete agreement that extends until Trump ceases his campaign for president, identified in the contract as the “Non-Compete Cutoff Date.” The agreement also forbids volunteers from working for another presidential candidate, should they change their minds.

In the event of a Trump victory in November’s general election, the non-compete clause could extend until his 2020 reelection campaign or even 2024, at the end of a second Trump term, the document explains. If Trump loses but wants to run again in the next election or in any presidential election in the future, the contract states the volunteer cannot work for another candidate.

Volunteers are, once again, theoretically bound to “to prevent your employees from” working on any other presidential campaign at any point while Trump is running for president, ostensibly locking them into Trump’s political career for life.

The Daily Dot viewed Trump’s volunteer contract at the campaign’s New York City headquarters on Monday morning. During that time, approximately two dozen prospective Trump volunteers handed over their state identification, submitted to a voluntary background check, and took the contract to read over and sign.

The Trump campaign did not respond to our request for comment.

Update 3:09pm CT, Sept. 2, 2016: As Cincinnati.com reports, Trump’s nondisclosure agreement must now be agreed to by volunteers who sign up online.