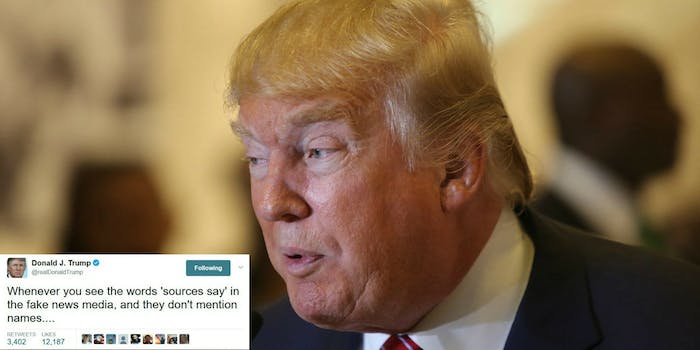 Donald Trump is back in the U.S. And now he's back on Twitter.

Now that he’s back in the U.S. after an extensive foreign trip, his first as president, Donald Trump returned to his old buddy, his Twitter account, and proceeded to go after the media.

With the news that his son-in-law Jared Kushner allegedly tried to open a secret line of communication with Russia during the Trump transition and with unrelenting criticism continuing to bounce around his administration from all corners, Trump said early Sunday morning he thinks the media is fabricating their stories.

It is my opinion that many of the leaks coming out of the White House are fabricated lies made up by the #FakeNews media.

Whenever you see the words 'sources say' in the fake news media, and they don't mention names….

….it is very possible that those sources don't exist but are made up by fake news writers. #FakeNews is the enemy!

Trump, of course, has said that it isn’t only #FakeNews that’s the enemy. He’s also called the media “the enemy of the American people.”

But remember that Trump has been accused of using fake names so he could act as a so-called source for reporters who were writing about his businesses or his love life in the 1980s.

That’s when he apparently used names like John Miller and John Baron/John Barron to pass off information on Trump that he wanted printed in the newspapers. In 1990, Trump testified, when asked about the Barron pseudonym, that “I believe on occasion I used that name.”

And Trump’s Sunday morning tweets weren’t lost on the people of Twitter.

Did you fire Flynn because of fabricated leaks? https://t.co/UpcbGBEORF

Trump's claim that reporters make up sources is one of the most destructive things he's said yet. Scary.

Lest you think Trump’s bloviating is harmless, consider the news that a recent journalist was arrested for asking a question and the plight of the Guardian’s Ben Jacobs, who was allegedly attacked last week by Greg Gianforte the day before he was elected to fill a House of Representatives seat in Montana.

Gianforte’s scuffle drew condemnation from fellow Republicans, including Paul Ryan. Oh, and Trump had something to say about that race on Sunday, as well, though he didn’t comment on the alleged attack.

Does anyone notice how the Montana Congressional race was such a big deal to Dems & Fake News until the Republican won? V was poorly covered