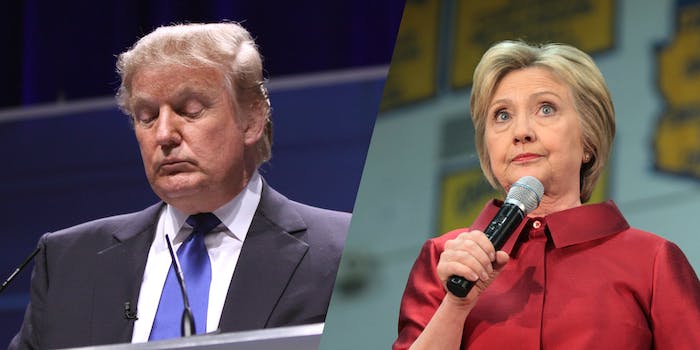 He says Jill Stein's money-raising efforts are a 'scam.'

Now that the Hillary Clinton campaign has joined Jill Stein’s efforts to recount the 2016 election results in Wisconsin, Michigan, and Pennsylvania, Donald Trump has officially responded in the form of a tweetstorm that ran from Saturday evening to early Sunday morning.

The response for Trump was simple: He called Stein’s efforts at raising money a “scam,” and his campaign released a statement Saturday calling the Clinton campaign “a pack of sore losers.”

The Democrats, when they incorrectly thought they were going to win, asked that the election night tabulation be accepted. Not so anymore!

Hillary Clinton conceded the election when she called me just prior to the victory speech and after the results were in. Nothing will change

Hillary's debate answer on delay: "That is horrifying. That is not the way our democracy works. Been around for 240 years. We've had free —

and fair elections. We've accepted the outcomes when we may not have liked them, and that is what must be expected of anyone standing on a –

during a general election. I, for one, am appalled that somebody that is the nominee of one of our two major parties would take that kind —

of position." Then, separately she stated, "He said something truly horrifying … he refused to say that he would respect the results of —

this election. That is a direct threat to our democracy." She then said, "We have to accept the results and look to the future, Donald —

Trump is going to be our President. We owe him an open mind and the chance to lead." So much time and money will be spent – same result! Sad

Previously on Saturday, Kellyanne Conway, Trump’s campaign manager, released a statement, saying, “What a pack of sore losers. After asking Mr. Trump and his team a million times on the trail, ‘Will HE accept the election results?’ it turns out Team Hillary and their new BFF Jill Stein can’t accept reality.

“Rather than adhere to the tradition of graciously conceding and wishing the winner well, they’ve opted to waste millions of dollars and dismiss the democratic process. The people have spoken. Time to listen up. #YesYourPresident.”

Clinton, for what it’s worth, has earned more than 2 million more popular votes than Trump.

As of Sunday morning, Stein, who has called the election “hack-riddled,” had raised more than $6 million to petition Wisconsin, Michigan, and Pennsylvania to recount their votes. Wisconsin already is in the process of doing so, while the deadlines to apply for a recount in Pennsylvania and Michigan are Monday and Wednesday, respectively.

On Saturday, Clinton’s general counsel Marc Elias wrote in a Medium blog post that the Clinton campaign would participate in the recount, even though it wasn’t entirely optimistic about changing the results.

“Because we had not uncovered any actionable evidence of hacking or outside attempts to alter the voting technology, we had not planned to exercise this option ourselves, but now that a recount has been initiated in Wisconsin, we intend to participate in order to ensure the process proceeds in a manner that is fair to all sides,” Elias wrote. “If Jill Stein follows through as she has promised and pursues recounts in Pennsylvania and Michigan, we will take the same approach in those states as well.”

To be fair, Trump stated for much of his campaign that the election was rigged and that he might not accept the results—unless he won. Now that somebody else is contesting it, he’s annoyed. And, apparently, sad.