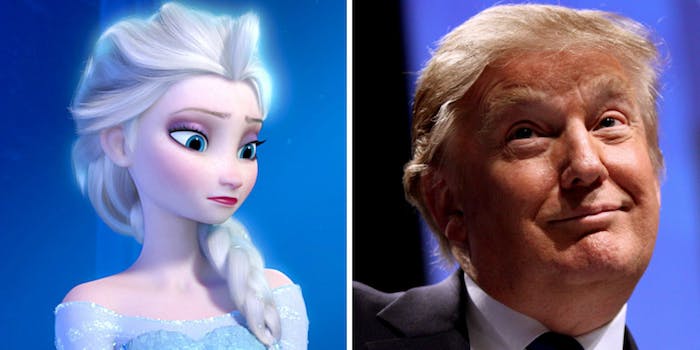 Somebody needs a warm hug.

If you thought Donald Trump, still under fire for his inflammatory Hillary Clinton tweet that involved piles of cash and a Star of David lookalike, was just going to let it go, you guessed wrong.

That’s because the presumptive Republican nominee kept the subject of anti-Semitism burning alive on Twitter Wednesday night, and he invoked one of the most popular Disney movies of all time to make his point.

Where is the outrage for this Disney book? Is this the 'Star of David' also?
Dishonest media! #Frozen pic.twitter.com/4LJBpSm8xa

Trump, in fact, spent much of his speech in Cincinnati on Wednesday night saying how he regretted that his team deleted the original tweet—the one with the star—that accused Clinton of being the most corrupt presidential candidate in history and replaced it with a graphic of a circle. He also continued to defend his admiration of brutal Iraqi dictator Saddam Hussein’s ability to kill terrorists.

But with Clinton still facing backlash over her handling of classified materials and the subsequent FBI investigation, Trump spent little time attacking her on those issues. Instead, he was worried about Frozen.

The FBI couldn't have given Donald Trump a better present if it had been wrapped in a bow, and he's tweeting Disney stickers.

Donald Trump has several big flaws as a candidate. But the most damaging to his chances is his total lack of message discipline.

And just where did Trump get that Frozen image? At a local Cincinnati bookstore or something?

But let’s save the most impactful tweet for last. Clearly, somebody on Clinton’s social media team knows the Frozen song, “Do You Want To Build a Snowman?”

Do you want to build a strawman? https://t.co/AoeNTJOGpo

Even in Frozen parlance, that’s one helluva burn.