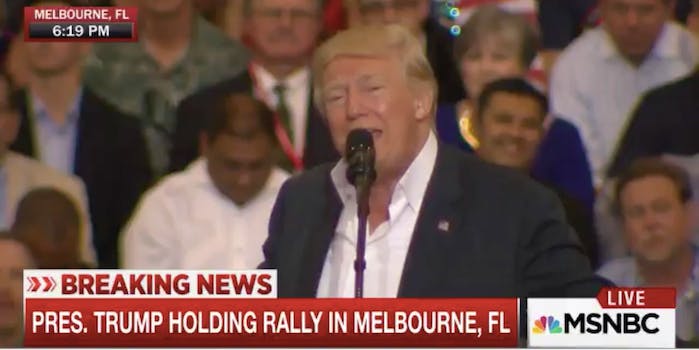 Did the president just make up a terrorist attack?

It comes on the heels of Kellyanne Conway and Sean Spicer's false claims.

For the third time in less than a month, a member of Donald Trump‘s administration falsely cited a terror attack as justification for its travel ban.

Previously, it was Kellyanne Conway and Sean Spicer.

This time, it was the president himself.

At a speech in Melbourne, Florida last night, Donald Trump told his audience that what happened in Sweden the night before was another example of refugee-committed terrorism in Europe, proof of the need for his travel ban.

The only problem with that? No terror incidents were reported in Sweden that night.

The former prime minister of Sweden took to Twitter to say nothing had happened.

Sweden? Terror attack? What has he been smoking? Questions abound. https://t.co/XWgw8Fz7tj

The official Twitter account of Sweden—which is run by a different Swede each week—said nothing happened in their country.

And if anyone has missed it, NOTHING HAS HAPPENED IN SWEDEN! There is no terrorattack or anything of the sort.

While the president didn’t explicitly say what happened in Sweden that evening, he immediately went on to reference Brussels and Nice in the same vein, two large-scale terrorist attacks, implying that the Sweden incident was similar. Earlier in the speech, he referenced Germany, which had also had a terror attack.

No one is sure what Trump is or was saying, but that didn’t stop the jokes from rolling in.

What happened in Sweden Friday night? Did they catch the Bowling Green Massacre perpetrators?

There is speculation that what Trump was referring to was a Tucker Carlson segment from the other night, where filmmaker Ari Horowitz claimed that Sweden was covering up a rash of rapes committed by refugees and that asylum seekers there live like kings in zones police are afraid to go into.

Horowitz claims to have entered one of those zones, of which he says there are 30 in the country that police won’t enter, where he was immediately beaten by five Islamic “thugs.”

He also calls Stockholm the “rape capital of world” after it started accepting migrants.

According to the New York Times, Sweden took in over 250,000 refugees in the past three years and because of that, Trump said “they are having large problems.”

Update 6:14am CT, Feb. 20: The president confirmed on Twitter he was referring to the Fox News segment.

My statement as to what's happening in Sweden was in reference to a story that was broadcast on @FoxNews concerning immigrants & Sweden.