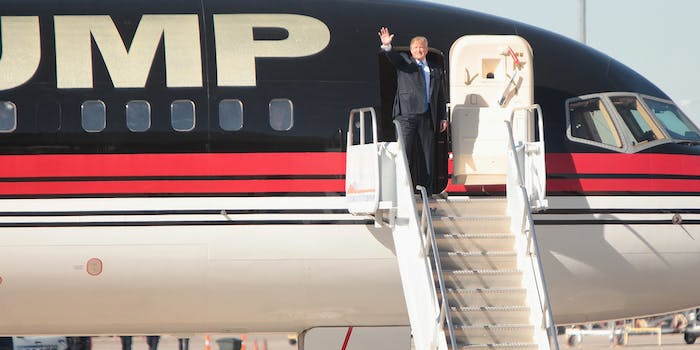 Sen. Rand Paul will fill the Trump-sized hole in the prime-time debate.

Thursday brings the final debate between Republican presidential hopefuls before the pivotal Iowa Caucus. As polling numbers widen, the Fox News showcase will serve as last call for stump speeches and political haymakers.

Missing in action, however, will be top-seeded firebrand Donald Trump—who at a press conference on Tuesday said he’ll be sitting this one out.

“Let’s see how much money Fox is going to make on the debate without me,” Trump told the New York Times, citing his recent feud with the cable news network. “It’s time that somebody plays grownup.”

Pathetic attempt by @foxnews to try and build up ratings for the #GOPDebate. Without me they'd have no ratings! https://t.co/2bx54VKpQh

Trump campaign manager Corey Lewandowski likewise told the Times that this position was “not under negotiation.” The announcement came shortly after Fox News announced its debate lineup via Twitter.

Trump’s been at odds with the network—particularly anchor Megyn Kelly—since the two clashed during August’s Fox News debate. She pressed him about past, sexist comments, which later led to jabs on Trump’s part on social media and live TV.

A new CNN poll on Tuesday showed Trump’s lead in the race swelling to 41 percent among likely Republican voters. In effect, Trump is taking a knee on debate preseason and eliminating the risk of a potential gaffe.

For his part, Sen. Ted Cruz (R-Texas) responded to the news by challenging Trump to a one-on-one debate. Cruz and Trump are the clear polling leaders in Iowa.

The main stage shakeup means that Sen. Rand Paul (R-Ky.) will fill the Trump-sized hole in the prime-time debate. Jim Gilmore, who served as Virginia governor 14 years ago and has yet to garner enough support to qualify for a debate, will replace Paul and join Carly Fiorina, Mike Huckabee, and Rick Santorum on the undercard.