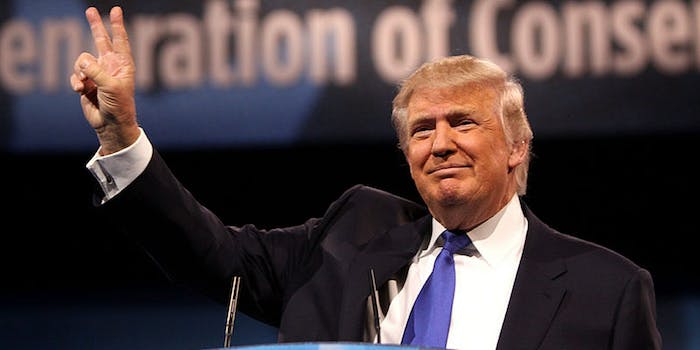 Trump calls for ‘total and complete shutdown’ of all Muslims entering the U.S.

Trump wants a pause until the government 'can figure out what is going on.'

On Monday, 2016 Republican presidential front-runner Donald Trump called for a “total and complete shutdown of Muslims entering the United States.”

The ban, which Trump says he would put in place “until our country’s representatives can figure out what is going on,” would apply to both immigrants looking live in the United States permanently as well as tourists, Trump campaign manager Corey Lewandowski told the Washington Post.

Just put out a very important policy statement on the extraordinary influx of hatred & danger coming into our country. We must be vigilant!

“Without looking at various polling data, it is obvious to anybody the hatred is beyond comprehension,” Trump said in a statement released Monday evening that quickly spread across the Internet. “Where this hatred comes from and why we will have to determine. Until we are able to determine and understand this problem and the dangerous threat it poses, our country cannot be the victims of horrendous attacks by people that believe only in Jihad, and have no sense of reason or respect for human life.”

Confirming the authenticity of the statement to the New York Times, a Trump spokesperson said the statement was prompted by “death,” referring to last week’s terrorist attack in San Bernardino, California that left 14 people dead.

Trump’s assertion to cut off all Muslim immigration comes one day after President Barack Obama, in a speech about his administration’s policy toward combating terrorism and ISIS (aka ISIL or Daesh), explicitly argued against policies like the one Trump is advocating.

“It is our responsibility to reject religious tests on who we admit into this country. It’s our responsibility to reject proposals that Muslim Americans should somehow be treated differently,” Obama said. “Because, when we travel down that road, we lose. That kind of divisiveness, that betrayal of our values plays into the hands of groups like ISIL.”

In the recent weeks, prominent conservatives like Rupert Murdoch and Texas Sen. Ted Cruz have called for issuing a religious test to stop Muslim refugees fleeing Syria’s bloody civil war from settling in the United States. Trump has gone the furthest among the 2016 Republican pack in openly calling for discrimination against Muslims in the United States—indicating that he would be open to requiring all Muslims to carry cards identifying them by religion and register in a centralized tracking database.

In a statement issued shortly after Trump’s, Cruz attempted to put some distance between himself and the former Celebrity Apprentice host. “Well, that’s not my policy,” he said, highlighting legislation he introduced in the Senate that would put a three-year moratorium on refugees coming from countries “where ISIS or Al Qaeda can control a substantial amount of territory.”

Former Florida Gov. Jeb Bush (R), who trails Trump in the fight for the nomination, was considerably more blunt.

Donald Trump is unhinged. His "policy" proposals are not serious.