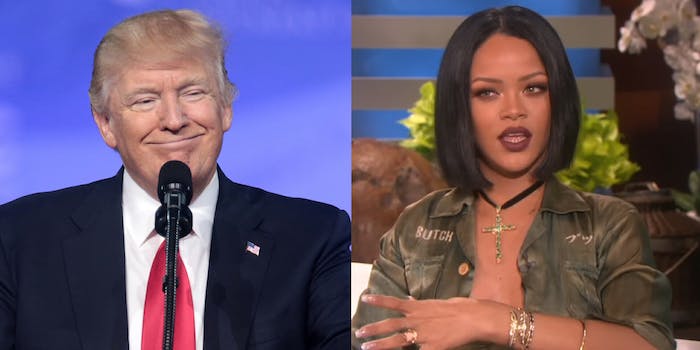 The president’s like was flagged by @TrumpsAlert, a Twitter bot that shares when a member of the Trump family likes tweets, follows, or unfollows people on the social media platform.

The tweet was written by @heavenrants, a writer, who shared a snippet of an interview Rihanna gave with Interview Magazine.

In it, the artist talks about needing to “make time for yourself, because your mental health depends on it.”

The sentiment must have been something Trump agreed with, because he liked @heavenrants’s tweet on Tuesday night.

(Or, perhaps it could have been a mistake-like).

This isn’t the first time Trump and Rihanna have been linked.

In 2018, the artist wasn’t pleased that Trump was using her song “Don’t Stop The Music” during a rally in Tennessee, CNN reported at the time.

She responded to a tweet from a Washington Post reporter who noted that the song was being played, saying it wouldn’t be used for “much longer.”

The president also has an odd history of liking tweets.

Trump’s first like, back in 2013, was of someone dissing him, calling him “self-possessed.”