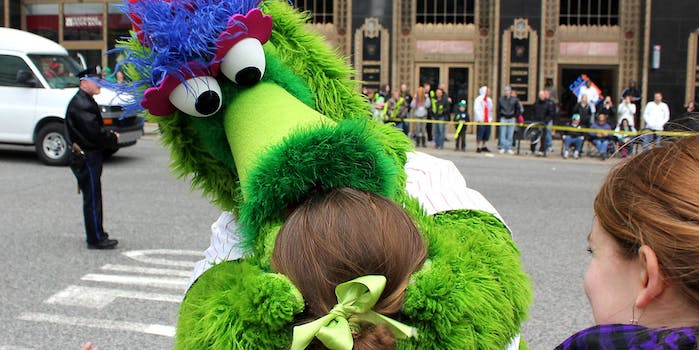 Photo via Mobilus in Mobili/Flickr

But does the Phillie Phanatic have the temperament to be president?

When the Republican presidential campaign was still a three-man race between Donald Trump, Ted Cruz, and John Kasich, Trump shuffled into the Pennsylvania primary in April and pulled out an impressive 48.3 percent of the vote to dominate his two opponents and win the state.

With presumptive Democratic nominee Hillary Clinton having beaten Vermont Sen. Bernie Sanders by 20 points in the Democratic primary, one could reasonably expect a tough matchup when the two face off in the Keystone State in the general election.

Unless the Phillie Phanatic gets involved. If that’s the case, Trump’s campaign is in major trouble.

According to a recent Public Policy Polling survey, 46 percent of Pennsylvanians think the longtime mascot of the Philadelphia Phillies is more qualified to be president than the Republican nominee, who received 40 percent of the vote. Fourteen percent of those surveyed aren’t sure who they would choose.

As CSN Philly noted, though, the Phillie Phanatic isn’t even eligible to become president, because the mascot apparently was born in the Galapagos Islands and is not an American citizen.

Plus, Trump’s opposition researchers wouldn’t have to go far to find some pretty damning video of the Phanatic in action.

(Actually, after watching all of the Phanatic’s handiwork, it’s no wonder he’s such a popular figure in the state. The dude seems beyond cool.)

But before Clinton gets too comfortable in Pennsylvania and automatically assumes the state will go blue in the general election, the PPP found that, in a head-to-head matchup, Clinton and Trump tie at 44 percent. Clinton wins 41-40 if Libertarian candidate Gary Johnson (6 percent) and Green Party candidate Jill Stein (3 percent) are in the mix.

At this point, perhaps the only thing that could save Trump in Pennsylvania is this: Phillie Phanatic for vice president.