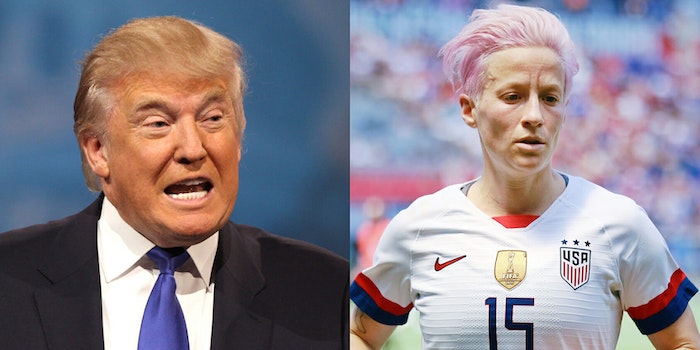 It was pretty long winded.

President Donald Trump complained about U.S. Women’s Soccer star Megan Rapinoe’s statement about not to attend any potential White House ceremonies should they win the Women’s World Cup this year in a Twitter rant on Wednesday morning.

The president was responding to comments Rapinoe made when speaking with soccer magazine Eight by Eight where she said she would not be “going to the fucking White House” if the team wins the World Cup, adding that she did not think Trump would invite the team.

The comments seemed to spark Trump, who said that he planned on inviting the team to the White House regardless of whether the team wins the international soccer competition. Then he went on a tangent about other sports.

“Women’s soccer player, @meganrapino, just stated that she is ‘not going to the F…ing White House if we win.’ Other than the NBA, which now refuses to call owners, owners (please explain that I just got Criminal Justice Reform passed, Black unemployment is at the lowest level…” he wrote in a series of tweets, adding: “….in our Country’s history, and the poverty index is also best number EVER), leagues and teams love coming to the White House. I am a big fan of the American Team, and Women’s Soccer, but Megan should WIN first before she TALKS! Finish the job! We haven’t yet….”

“….invited Megan or the team, but I am now inviting the TEAM, win or lose. Megan should never disrespect our Country, the White House, or our Flag, especially since so much has been done for her & the team. Be proud of the Flag that you wear. The USA is doing GREAT!”

Trump deleted the first series of tweets and replaced them after he tagged the wrong account for Rapinoe. 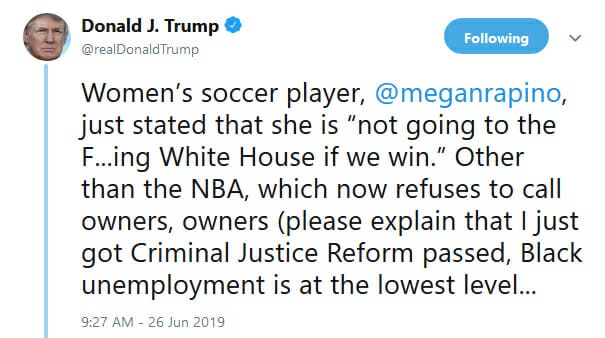 The owner of the account Trump originally tagged in the tweet, @meganrapino, responded to the incorrect tag:

“and she was right to say so cry me a river plus this isn’t even her acc,” the account wrote, echoing comments Rapinoe made.

and she was right to say so cry me a river plus this isn’t even her acc https://t.co/gKQnfclIUZ

Earlier this week Trump told the Hill that he didn’t “think” it was appropriate for Rapinoe to protest during the national anthem, an echo of his comments made about NFL players doing the same.

Rapinoe hasn’t sung the national anthem during the World Cup this year alongside her teammates as a form of protest and knelt during the anthem prior to a game against Thailand in 2016.