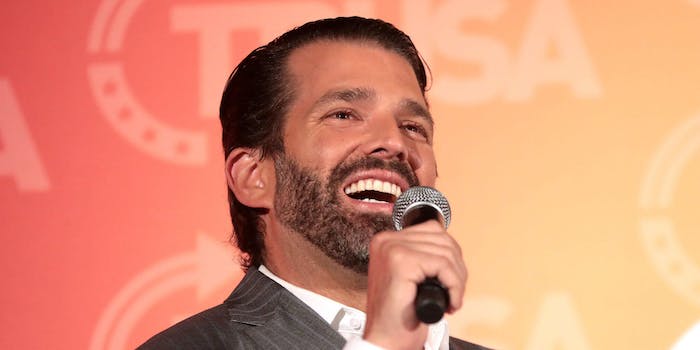 Trump Jr. ranked No. 1 on best-seller list—after the GOP gave away copies of his book

Not everyone's buying it.

Donald Trump Jr.’s book Triggered is featured on the New York Times’ best-seller list, but some people aren’t buying it.

President Donald Trump, who has spent much of his term bickering with the New York Times, seemed to have a change of heart after Triggered was listed as the publication’s best-selling nonfiction book this week.

“Wow! Was just told that my son’s book, ‘Triggered,’ is Number One on The New York Times Bestseller List. Congratulations Don!” Trump tweeted.

Wow! Was just told that my son’s book, “Triggered,” is Number One on The New York Times Bestseller List. Congratulations Don!

However, some noted the special character featured next to the Times listing called into question how popular Donald Trump Jr.’s book really is. Fortune reports that like other nonfiction books, Trump’s Triggered was likely bought in bulk, which would catapult his ranking.

Confirmed: @DonaldJTrumpJr made the NYT bestseller list thanks to "institutional, special interest, group or bulk purchases" (the meaning of that cross symbol, per the NYT); in other words, it looks like his dad and the GOP bought him a bestseller so he could put it on his resume pic.twitter.com/IfZZOqI7yl

“Institutional, special interest, group or bulk purchases, if and when they are included, are at the discretion of The New York Times Best-Seller List Desk editors based on standards for inclusion that encompass proprietary vetting and audit protocols, corroborative reporting and other statistical determinations. When included, such bulk purchases appear with a dagger (†),” the New York Times states on its website.

So who mass ordered Trump’s book? Popular.info writer Judd Legum reported on Nov. 5 that a Republican National Committee email offered hand-signed copies of Triggered to anyone who donated $50 or more.

Naturally, people on Twitter are convinced that the GOP and Trump campaign have everything do with Triggered getting to the top of the best-seller list.

“The @GOP is gonna have one hell of a bonfire with all the copies of Don Jr.’s book they just bought in bulk,” @jeremynewberger tweeted.

The @GOP is gonna have one hell of a bonfire with all the copies of Don Jr.'s book they just bought in bulk.

Triggered is marketed as a book that “exposes all the tricks that the left uses to smear conservatives.” And it certainly has folks on both sides of the aisle feeling triggered.