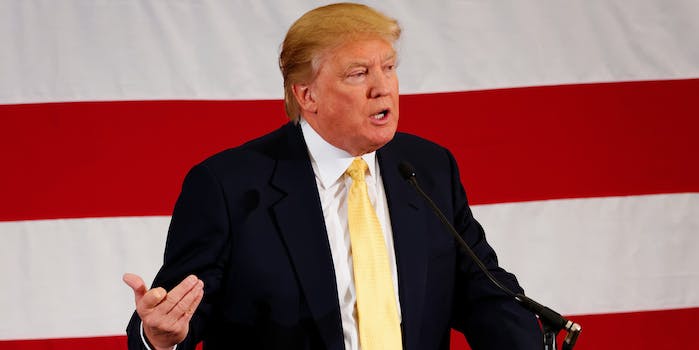 Donald Trump vows to protect the internet, gets all the facts wrong

Internet freedom has now become a point of attack for Trump's campaign.

The man who once recommended “closing up the internet in some way” now claims to be a stalwart protector of internet freedom.

In a statement released on Wednesday, Republican nominee Donald Trump‘s campaign said it opposes the transfer of the United States’s stewardship over key technical internet functions to international stakeholders.

“Donald J. Trump is committed to preserving internet freedom for the American people and citizens all over the world,” Stephen Miller, Trump’s national policy advisor, said in a statement. “The U.S. should not turn control of the Internet over to the United Nations and the international community.”

Miller went on: “Internet freedom is now at risk with the president’s intent to cede control to international interests, including countries like China and Russia, which have a long track record of trying to impose online censorship. Congress needs to act, or Internet freedom will be lost for good, since there will be no way to make it great again once it is lost.”

To be clear, no one is considering turning over “control of the internet” to anyone, particularly not the United Nations. In fact, neither the U.S. nor any other nation controls the internet.

Instead, on Oct. 1, the U.S. government will transfer stewardship of Internet Assigned Numbers Authority (IANA) functions, including the Domain Name System (DNS)—the function that turns “dailydot.com,” for example, into a computer-readable IP address—to the Internet Corporation for Assigned Names and Numbers (ICANN), an international organization based in California.

The political hoopla over the transfer of stewardship to ICANN is led by Sen. Ted Cruz (R-Texas), who has used the issue as a bludgeon against the Obama administration, which backs the plan. Trump’s support for Cruz’s “misguided” crusade, as World Wide Web inventor Tim Berners-Lee characterized it, is merely a way to attack his Democratic opponent, Hillary Clinton.

Say what you will about Clinton, but this particular line of attack has no basis in reality.