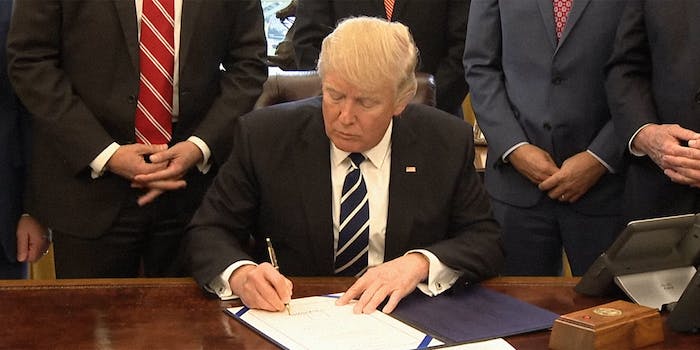 It may seem significant every time Trump signs an executive order. It's not.

The moment was huge, even tremendous. President Donald Trump stood onstage next to a pair of smiling nuns, invited up to the podium to thunderous applause. The two women, representatives of the Little Sisters of the Poor, flashed an approving thumbs up for reporters. While an American flag flapped in the background, patriotically windstruck by the Beltway breeze, the president promised that the nuns’ “long ordeal would soon be over.” Everything was beautiful and nothing mattered.

On May 4, Trump signed an executive order designed to strengthen the “religious freedom” of faith groups in the United States by allowing them to express their political views without reprisal from the federal government. While other actions from the new president inspired widespread outcry from resistance groups who threaten to sue the White House, the opposition was muted.

This is not a credit to the president’s success. There just wasn’t anything to oppose.

The American Civil Liberties Union stated that it would not take legal action against Trump, who claimed that the order would “totally destroy” the Johnson Amendment, a 1954 law that threatens to revoke churches’ tax-exempt status if their leaders openly endorse political candidates. (It’s rarely enforced.) While pastors and clergy can express their views on various issues—including abortion and same-sex marriage—the Johnson Amendment makes it verboten, par exemple, for the Catholic Church to stump for Trump.

The ACLU argued that the president has no authority to unilaterally strike down that law, despite Trump’s campaign pledge to do so. Calling the order a case of “fake news,” the legal group wrote: “Today’s executive order signing was an elaborate photo-op with no discernible policy outcome.”

Trump has repeatedly used executive orders to push his extremist policy agenda on immigration, reproductive rights, and workplace discrimination, but these orders have amounted to an incessant smorgasbord of wishful thinking on behalf of the Oval Office’s wispy-haired occupant. Those presidential policies that have not been outright blocked by the court system have proven just as good as the paper they are written on. Trump might as well be signing them in invisible ink.

Since taking office in January, Trump has introduced 36 executive orders, which averages one new policy every 3.17 days. If the commander-in-chief keeps at his current rate, Trump will sign 461 orders during his four years in office. That’s hardly unprecedented: Franklin Delano Roosevelt enacted a likely-never-to-be-surpassed 3,700 presidential policies to help pull the United States out of the Great Depression.

What is novel, though, is Trump’s futility. Executive orders are rarely opposed by Congress or the courts, but the 45th president’s policies have been continually halted.

A January travel ban attempting to halt entrants from seven majority Muslim nations was first put on pause by judges in New York and Massachusetts just hours after the order sparked nationwide protests. After a three-judge panel in the Ninth Circuit Court of Appeals upheld a temporary injunction against the policy in February, the White House unveiled an amended travel ban in March, one which removed Iraqi foreign nationals from the block list. The order still applied to visitors from Iran, Libya, Somalia, Sudan, Syria and Yemen. The new version was blocked by a U.S. District Court Judge in March and remains in the courts.

This has happened to Trump repeatedly. Most recently, an order to withhold federal funding from sanctuary cities was stopped by a judge in San Francisco.

Many of those executive orders that have not been outright blocked have proven either of dubious legality or completely ineffective. To be fair, presidential policies are often little more than statements of intent rather than binding decisions. When former President Barack Obama signed an order closing the prison at Guantanamo Bay shortly after being elected in 2008, the detention center remained open. It still is in operation. Yet other EOs, most famously the Emancipation Proclamation, have led to groundbreaking changes in the fabric of American life.

But even by the lowest of bars set, many of Trump’s executive orders don’t pass muster. They amount to the masturbatory fantasies of a man who believes he can relieve all our ailments with his executive touch. Nobody, not even the rain, has such small hands.

The president’s latest cure-all is designed to update the federal government’s cybersecurity guidelines through federal oversight. That’s a nice idea, as well as a timely one amid continuing reports of Russian interference during the 2016 election. The order, signed last week, advises departments to secure their systems within the next three months.

“At best, we’ll see a kind of haphazard, patchwork of fixes made of band-aids, superglue, and those little plastic bag ties from grocery store bread,” Dan Tentler, the founder of security firm Phobos Group, told ZDNet in an interview. “The most likely outcome, I wager, is that the executive branch gets a glimpse at just how ancient some of this gear is and they’ll have to re-issue this executive order.”

A handful of Trump policies, including orders on gender equality in the workplace and international funding for reproductive health, have been impactful. The harm of those decisions should not be ignored. But the cybersecurity is yet another indication that this administration continues to be woefully inept when it comes to getting just about anything done, whether it’s a healthcare bill that’s been scrapped multiple times or an anti-LGBTQ executive order that can’t seem to get introduced. It was scheduled to be signed in February before Trump tabled it.

Reports have indicated that it’s Ivanka Trump, the president’s daughter, who’s standing in the way of that EO. But an order that would give businesses, federal agencies, and individuals the right to discriminate against LGBTQ people has reportedly continued to be workshopped behind the scenes. Rumors indicated that that order would be introduced a few weeks ago, but the toothless Johnson Amendment policy was enacted instead.

If that order hasn’t been introduced, it’s because the White House just can’t come up with much that stands up to legal scrutiny. Trump could gather every nun in America together for a happy, poll-friendly selfie and it won’t change the truth: His policies are failing, and they will take his presidency with them.