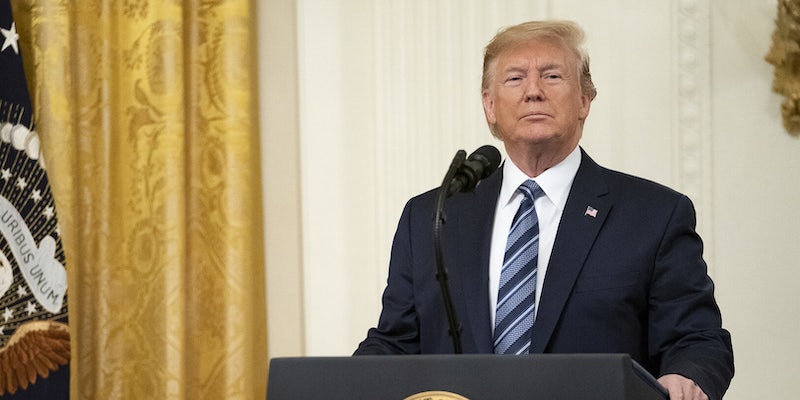 It's unclear what the administration will do about e-cigarettes.

President Donald Trump did not sign off on a proposed ban of flavored e-cigarettes earlier this month, fearing that such a move would have political consequences, according to a new report.

The Washington Post reports that on Nov. 4, the president refused to sign a “decision memo” and decided not to hold a news conference laying out how the administration would ban most flavored e-cigarettes—a move that was announced in September.

Since the initial announcement, there have been signs that the ban would not go as far as initially proposed, and reports suggested that some conservatives were worried the ban would impact Trump in the 2020 presidential election. There was also an enormous push back from vapers and the vaping industry.

The potential political ramifications seem to have pushed the president away from approving a ban.

Officials said the blowback to Trump’s vow to ban most flavored e-cigarettes had rattled him. In an aggressive social media campaign — #IVapeIVote — advocates claimed the ban would shut down thousands of shops, eliminating jobs and sending vapers back to cigarettes. The president saw protesters at events and read critical articles. His campaign manager, Brad Parscale, privately warned the ban could hurt him in battleground states, said a person who spoke on the condition of anonymity to discuss internal deliberations.

Last week, Trump said he was meeting with representatives from the vaping industry, adding in a tweet that “Children’s health & safety, together with jobs, will be a focus” of the get-together.

It is unclear whether the administration will move forward with a ban, or push a scaled-back one.