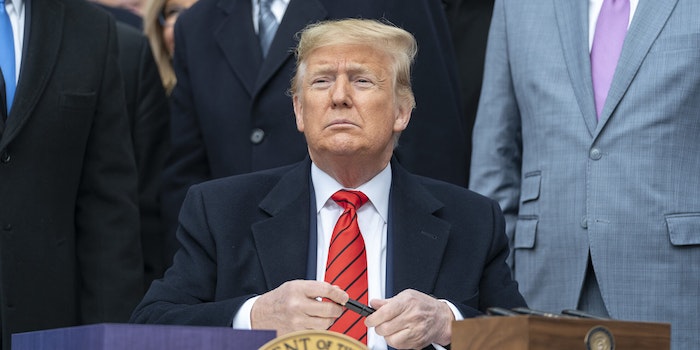 Trump acquitted on both charges in impeachment trial

President Donald Trump was acquitted on abuse of power and obstruction charges by the Senate on Wednesday afternoon, marking a swift end to his impeachment trial in Congress’ upper chamber.

The president’s acquittal was largely expected in the Republican-controlled Senate, but became all but certain after Republicans secured enough votes to block a motion that would have allowed for witnesses to be heard in the trial.

Trump was acquited on the first charge after just 48 senators voted to convict him of abuse of power. A conviction required 67 “guilty” votes.

On the second vote, obstruction of Congress, senators also voted to acquit. Just 47 senators voted to convicted Trump on the second charge.

The vote was predominantly on party lines. However, in the run-up to the vote, Sen. Mitt Romney (R-Utah) announced he would vote to convict the president on the abuse of power charge.

The decision seemed all but sealed last week when Sen. Lamar Alexander (R-Tenn.) said that he opposed calling witnesses.

In his tweet thread, Alexander admitted the president’s action were wrong, but said that additional testimony wouldn’t change his decision to not remove Trump.

A quick acquittal came into question last week after reports came out that former National Security Adviser John Bolton wrote in a draft of his upcoming book that Trump told him that military aid would be held up for Ukraine until the country investigated former Vice President Joe Biden and his son.

But Republicans’ attitudes on voting to remove Trump were best summed up in a Medium essay written by Sen. Marco Rubio (R-Fl.) in advance of the vote.

“That is why six weeks ago I announced that, for me, the question would not just be whether the President’s actions were wrong, but ultimately whether what he did was removable. The two are not the same. Just because actions meet a standard of impeachment does not mean it is in the best interest of the country to remove a President from office.”

Trump’s interactions with Ukraine and his desire for them to investigate a political rival were at the heart of the impeachment hearings.

Early lastly Friday, the road to acquittal seemed all but locked up after Republicans secured the number of votes necessary to shoot down a motion to have witnesses testify during the trial. Ultimately 51 Republicans voted against a call for witnesses, just succeeding in passing the motion.