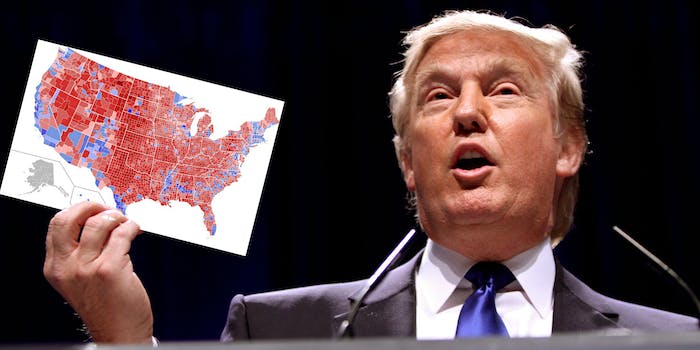 In case anyone forgot, President Donald Trump won the 2016 election.

President Donald Trump is still living in 2016. Specifically, he’s reliving Nov. 8, 2016, the day he won the White House. And he doesn’t want anyone to forget it.

Trump’s Electoral College victory remains one of the president’s go-to talking points, a thing he has brought up in countless interviews. But it appears simply mentioning that he won the election—as if anyone has forgotten—simply isn’t cutting it.

During a recent interview with Reuters (in which Trump admitted he thought being president “would be easier” than it is), Trump handed out printed maps of the 2016 electoral map and handed them out to the reporters, according to Reuters’ Jeff Mason.

Trump won the 2016 election over Democrat Hillary Clinton with 306 electoral votes—a healthy margin above the necessary 270 but by no means the largest electoral victory in recent history. The win came as a result of Wisconsin, Michigan, and Pennsylvania flipping for Trump thanks to a combined total of just under 80,000 votes. Trump lost the popular vote by 2.8 million votes—a figure his victory map does not show.

Perhaps more strange than the president of the United States giving reporters maps of his electoral victory nearly six months after he won is the fact that the date on the map is written British-style: “8 November 2016.” Go figure.

This is the first we’ve heard of Trump doing this, so it’s entirely possible that he used the map print-out tactic as a way to psyche-out the reporters or refresh their memory. (Mason wasn’t sure why Trump gave him the handout.) Either that or the president is doing this all the time and the world is an ever stranger place than any of us imagined.