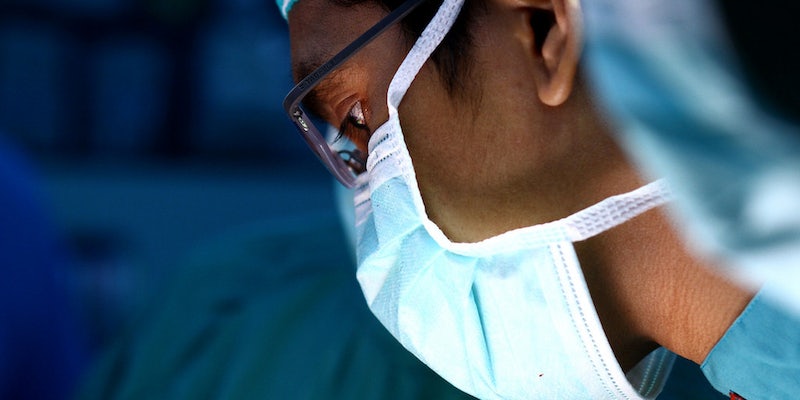 Want to know what’s happening in Gaza? Follow the doctors

This one is a matter of life or death.

One of the most troubling incidents in the current conflict between Israel and Hamas was the assault and subsequent destruction of Gaza’s El-Wafa Rehabilitation Hospital.

Before they were evacuated, 14 patients in critical condition were trapped inside while Israeli “warning rockets” slammed into the building’s roof and walls. Joe Catron, an American activist who volunteered to act as a human shield at El-Wafa, reported on the situation for several days, in the hopes that the Israeli Defense Force (IDF) would hesitate to launch a full-on assault with a foreigner embedded.

“The media attention foreign activists can garner for the hospital, perhaps more than our presence at it, may do something to deter future strikes,” Catron wrote in a column for Middle East Eye. “But what does it mean if our best strategy plays to the worst tendencies—racism, colonialism, a selective concern for human life—of the outside world?”

While the IDF’s news desk reportedly confirmed that the military understood El-Wafa hospital was not occupied by militants and contained no weaponry, patients and staff began an emergency evacuation on July 17, after an intense shelling by Israeli gunships off the coast. Basman Alashi, the facility’s director, communicated with the Israeli military by relaying messages through the International Committee for the Red Cross (ICRC).

Physicians at El-Wafa and other medical facilities throughout Gaza care for patients under some of the most stressful circumstances imaginable. Despite not being paid for several months, the doctors continue operating on the wounded, who continue to pour in each day.

Paramedics charged with locating and transporting the wounded face an even greater risk of injury or death. Once dispatched, they navigate a perpetual war zone in search of wounded people. Since the start of the conflict a over two weeks ago, the Gaza Strip, which is less than half the size of New York City, has been impacted by thousands of tons of explosives. In many instances, the clearly marked white-and-red ambulances have been targeted and destroyed.

The remains of an ambulance hit during the shelling of Shaja’ia, #Gaza pic.twitter.com/kbpa4vWTKk

Video of a wounded boy being rushed to medics in the Shojae’ya neighborhood of Gaza. Warning: This video depicts images of warfare that may upset some viewers:

To complicate matters, rumors of Hamas rockets being fired from Al-Shifa hospital—a claim rejected by members of the staff—are now circulating. In response, the Israeli military has threatened to attack the facility. On Thursday afternoon, Catron tweeted that he and a group of activists had decided to meet at the hospital to discuss the a possible Israeli strike. Hours later, the IDF shelled an elementary school in Beit Hanoun, killing 15 women, children, and UN workers who were seeking refuge from fighting.

“Israel is saying that they are bombing Gaza to get rid of tunnels and terrorists,” Dr. Mads Gilbert told Electronic Intifada in an audio interview. “I see no tunnels and terrorists in Shifa hospital.” So far, there’s no evidence that Hamas was using the UN shelter as a rocket site either.

According to Gilbert, a University of North Norway professor volunteering at Al-Shifa, the IDF has bombed at least 25 healthcare facilities, killing or injuring unnumbered medical staff workers.

To learn more about the conditions doctors operate under in Gaza, you can follow Catron and several English-speaking doctors at Al-Shifa hospital on Twitter:

War is tough. Imagining it from afar would be much, much worse. There’s nowhere on Earth I’d rather be right now. #Gaza

I slept through a house bombing near the #Gaza seaport a couple hours ago. Nothing here but the drones since I woke up. #GazaUnderAttack

We just witnessed a man being murdered, in front of us and in slow motion, in #Gaza‘s Shujaya neighborhood. #GazaUnderAttack

The moment u see Drs crying , Is the moment when u realize all the red lines have been crossed #GazaUnderAttack #Gaza pic.twitter.com/PniVeAsiaF

Intensive artillery bombs right now !!!! What the hell is going on #PrayForGaza

My shift ended as of 9 am and I am free to tweet as much as I desire, as long as I am still alive of course.

I noticed that relatives often refer to their fallen loved ones using present tense. It’s not denial, it’s faith. #PrayForGaza