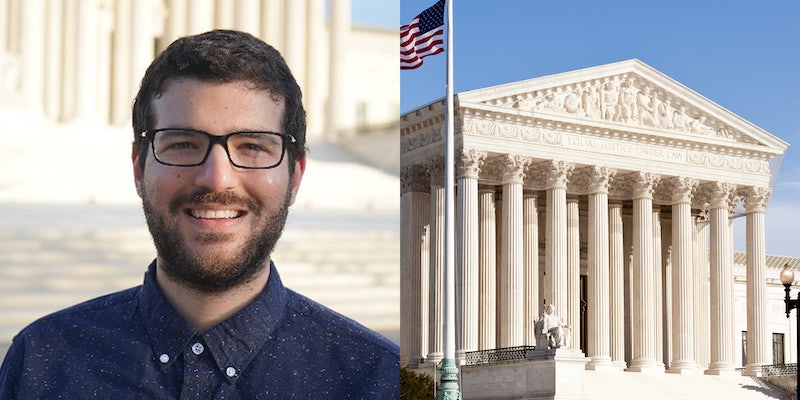 'If I received a leaked draft of Dobbs, why would I give it to Politico?'

Conservatives on Twitter are falsely identifying the leaker of the Dobbs v. Jackson Supreme Court decision as a Slate reporter thanks to him being on the Supreme Court’s press release list.

The reporter, Mark Joseph Stern, had an exchange on Twitter with a writer for the Washington Examiner and offered to help her sign up for an email list that would allow her to get Supreme Court decisions directly from the court.

After this exchange, conservative commentator Matt Whitlock conspired that Stern could have been the leaker of the Dobbs v. Jackson decision back in May.

Before the official Dobbs v. Jackson Women’s Health Organization decision in June, a leaked version of the decision was published by Politico, causing an online firestorm over both the news of the decision and the leak. The decision overturned Roe v. Wade and removed the constitutional protection of abortion in the U.S. In the wake of the news, instead of discussing the loss of abortion rights nationwide, conservatives online launched a crusade to find the leaker.

The conspiracy quickly caught fire, with other conservative Twitter accounts amplifying the theory. The tweet from Whitlock was retweeted by Sen. Josh Hawley (R-Mo.), pouring more fuel on the fire.

In reality, what Stern did is commonplace. The Supreme Court allows reporters to sign up for an email list to be notified when any actions are made on a case, including released decisions. Sometimes these decisions can be sent to reporters before the decision is known to the public.

Stern posted his DMs with Nicole Russell, the Examiner reporter, which shows that he simply gave her instructions to sign up for SCOTUS case updates.

In a statement for the Daily Dot, Stern categorically denied being the Dobbs leaker and said the allegations against him are absurd.

“These trolls, of course, were encouraging their nastiest, most hateful followers to flood my feed with accusations that I was the Dobbs leaker. (One declared that the ‘new GOP Congress’ should force me to testify under oath about the leak.) I informed all the major players here that they were spreading a complete lie, that their allegations were objectively and verifiably false, and that the real explanation is quite banal,” he said.

Stern said he asked the conservatives accusing him of leaking the Dobbs decision to correct their tweets, but they have not responded to his requests. Stern also said the logic behind the allegations is flawed.

“Frankly, I think it is grimly funny, because the reasoning makes no sense,” he said. “If I received a leaked draft of Dobbs, why would I give it to Politico? Why wouldn’t I keep the story of the year to myself? As a Supreme Court reporter, it would have been a highlight of my professional career. It is bizarre and incoherent to suggest that I would receive the leak then pass it off to Politico without credit.”

Other reporters on Twitter were quick to point out the absurdity of the situation.

“*After pulling off the first heist of a SCOTUS opinion in history* Yeah let me tweet about it openly,” one reporter joked.

“You’re a Supreme Court reporter by trade, published in a widely read website,” another wrote. “and you have the Dobbs draft. It’ll make international headlines. What’s your first move? That’s right, leak it to a competing widely read website. That just makes you grind harder.”