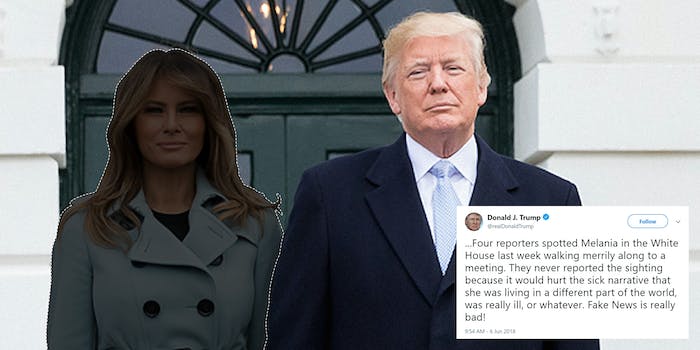 Did Trump just find out his wife is missing?

The president is furious.

President Donald Trump lashed out today at the media for perpetuating the mystery-conspiracy narrative that his wife, Melania Trump, had disappeared.

Over the course of May, Melania didn’t make a single public appearance, ostensibly while recovering from a kidney procedure. As the days she wasn’t spotted grew, media speculation surged.

But even her reappearance at an event for Gold Star families earlier this week didn’t quell skeptics and prompted speculation.

Body double? Even if it is her, she has not laid the rest questions about her disappearance, and whether or not she has separated from @realDonaldTrump. I think she is leaving him, but she will stick it out until he resigns, is impeached, or good forbid, the end of his term. https://t.co/bvRdL3Ou1c

President Trump has apparently had enough, firing off a series of tweets that accuse reporters of lying about seeing her to keep the narrative going.

The Fake News Media has been so unfair, and vicious, to my wife and our great First Lady, Melania. During her recovery from surgery they reported everything from near death, to facelift, to left the W.H. (and me) for N.Y. or Virginia, to abuse. All Fake, she is doing really well!

…Four reporters spotted Melania in the White House last week walking merrily along to a meeting. They never reported the sighting because it would hurt the sick narrative that she was living in a different part of the world, was really ill, or whatever. Fake News is really bad!

(Much like the “Where is Melania?” contingent, Trump, too, has speculated about people getting facelifts.)

While a great deal of the story was lighthearted—focusing on her unconvincing tweet saying all was well—some journalists did delve into the darker scenarios of her not showing her face.

And while it’s true that Melania has now made a brief appearance that should clear things up, it begs the question: The public was speculating for nearly a month that she’d gone missing. So did her husband just learn that she hadn’t been around until right now???