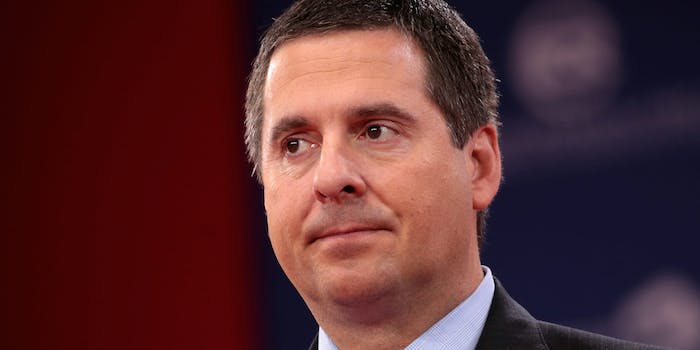 Nunes accidentally put the spotlight on himself again.

Rep. Devin Nunes (R-Calif.)—President Donald Trump’s strongest congressional ally—is again filing lawsuits against people he doesn’t like, and he’s again bringing attention to something he might want to keep quiet.

In March, Nunes filed a lawsuit against a parody account, Devin Nunes Cow, that brought it so much fame the cow passed Nunes in followers days later.

Yesterday, he sued news publisher McClatchy for a story you probably never read. Thankfully, though, because of the suit, Nunes’ association with yachts, cocaine, and prostitutes is a top hashtag.

The suit stems from a story published by the Fresno Bee—which is owned by McClatchy—and reporter MacKenzie Mays, which said that a winery partially owned by Devin Nunes threw a yacht party where cocaine and prostitutes were present.

The article comes from a lawsuit a woman who worked on the cruise filed against Alpha Omega Winery. Writes the Bee:

The guests aboard the yacht that night — described in [Alene Anase’s] 2016 lawsuit as 25 of the Napa Valley-based winery’s top investors, all men — were openly using what appeared to be cocaine and “drawing straws” for which sex worker to hire, according to the lawsuit.

Anase alleges that on the Aug. 12, 2015 cruise she could hear sexual activity happening in the yacht’s bedrooms and witnessed men “fondling and suckling” sex workers’ breasts — some who appeared to be “too young to consent.” At least one of the several John Does listed as defendants allegedly suggested that Anase should also “provide services of a sexual nature.”

Nunes was not apparently on the cruise—or even aware of it—but as an investor in the winery, was named in the lawsuit. That’s the extent of the story. It didn’t much cause ripples when it was published. But thanks to Nunes again giving it oxygen, it’s at the top of Twitter trends today.

Hot on the heels of suing ⁦@DevinCow⁩, GOP Rep. Devin Nunes is now suing the ⁦⁦Fresno Bee for their story linking him to a lawsuit involving a Napa Winery’s cruise that allegedly featured prostitutes & cocaine. Hence: #YachtCocaineProstitutes https://t.co/1sAFcQj76O

So Rick, just so I’m clear. We shouldn’t use #YachtCocaineProstitutes in reference to Devin “Mad Cow” Nunes?

In the suit, Nunes also loops in political operative Liz Mair, who he previously sued in his case against Twitter parody accounts, claiming she helped get McClatchy to publish the story.