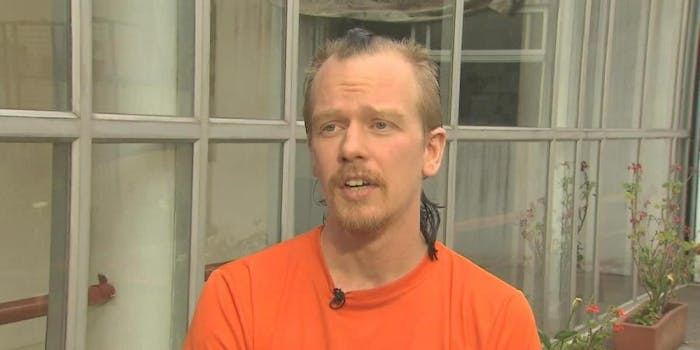 There has been no explanation.

The father of Swedish privacy activist Ola Bini said his son was a “political pawn” on Friday, as the 37-year-old remains indefinitely detained by Ecuadorian authorities and having been refused bail—despite the government’s failure to bring any criminal evidence or charges against him.

“My son is imprisoned without knowing what he is accused of and without evidence,” Dag Gustafsson told the Norwegian newspaper Klassekampen. “He has become a political pawn in a large game where the U.S. is also involved.”

Bini was arrested on April 11 by authorities as he prepared to fly out of Ecuador’s Quito Airport to attend a martial arts training course in Japan. Ecuadorian prosecutors said that they’d placed Bini under preventive detention while they investigated him for possible cyberattack charges, seizing his hard drives and computers.

Hours earlier, however, in England, staff at the Ecuadorian embassy in London handed over WikiLeaks founder Julian Assange to British authorities.

Bini had visited Assange several times during the WikiLeaks founder’s seven-year stay at the embassy, and the Swede’s father suspects that his son was arrested because of that personal friendship.

“The way I see it, Ola’s imprisonment is all about his relations with Assange,” Gustafsson continued. “He has seen Assange’s friends disappear one by one and felt it was his duty to maintain contact for Assange not to be completely isolated.”

According to Gustafsson, Bini’s relationship with the WikiLeaks founder had “nothing to do with either WikiLeaks or Assange’s own activities.”

In two hearings to date, Ecuador’s prosecutors have alluded vaguely to allegations of hacking, failing on both occasions to bring any charges or evidence to substantiate their claims.

Bini’s legal team argues that not only is he being arbitrarily detained but that his imprisonment is in breach of both Ecuadorian and international law. They have since referred the case to the United Nations’ Working Group on Arbitrary Detention.

“In the court, sweeping accusations of hacking were presented, but it has not been possible to say which computer systems are involved. We feel that he is accused of skills that he possesses and not of anything he has done,” Bini’s lawyer Toby Cadman told reporters last week.

Bini is an internationally recognized open source developer who has contributed his expertise in security and cryptography to internet privacy tools such as the Tor Browser and Enigmail.

“What the judge said when he was in court last was astonishing. He said that Bini cannot be released because he has not been able to determine what crime he has committed or who has been subjected to it,” Cadman continued. “For us, deprivation of liberty appears to be completely unfounded.”