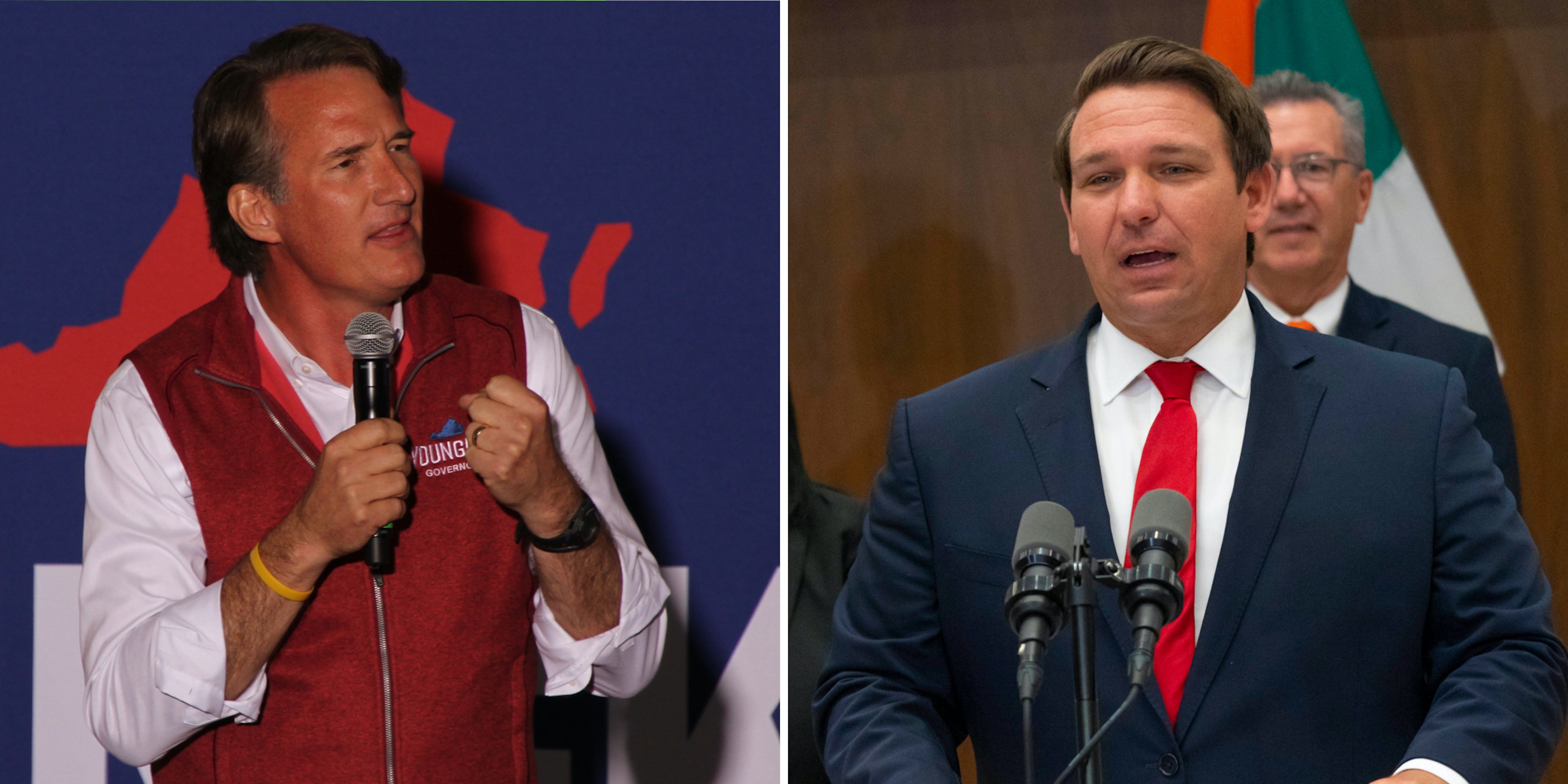 It's not quite clear how the governors stand to profit.

The thread, posted by user @SternLevine, alleges that Florida’s HB7—a new law aimed at curbing the teaching of ‘critical race theory’ in schools—opens the door for various collusion. The user cites a Tallahassee Democrat article earlier this week stating that “the only publisher approved by Gov. Ron DeSantis and the Florida Department of Education for K-5 mathematics is Accelerate Learning, a company out of Houston, Texas.”

“​​Since taking office, Youngkin has pushed legislation that mimics Florida’s almost to the letter,” the thread states. “Meaning, the company that he was affiliated with until running for government, would benefit from legislation he’s pushing through.”

Youngkin has frequently praised DeSantis for his leadership and attempted to follow his track record as governor, repealing mask mandates and signing executive orders that align with DeSantis’ policies.

Although Youngkin has targeted education in his campaign and started a hotline to report teachers, there is currently no similar bill near approval in Virginia that would tackle textbooks.

Earlier this month, the Florida Department of Education rejected 54 math textbooks submitted by publishers, 26 of which were rejected for containing “prohibited topics” like Critical Race Theory and Social-Emotional Learning.

“It seems that some publishers attempted to slap a coat of paint on an old house built on the foundation of Common Core, and indoctrinating concepts like race essentialism, especially, bizarrely, for elementary school students,” Desantis said in a press release.

By virtue of the rejection, the only publisher left standing with regular math textbooks approved by the Florida Department of Education is Accelerate Learning. Accelerate Learning’s website includes an undated diversity statement, committing the company to “supporting diversity in all its manifestations, which requires a consequent commitment to equity and inclusivity” and saying “our nation’s black communities have long faced the repeated, harmful effects of systemic racism within the justice and education systems.”

Christina Pushaw, DeSantis’ Press Secretary, expanded on the decision in a tweet this week.

“The state declining to purchase certain textbooks isn’t “banning” them,” she said. “If you want to teach your kid Woke Math, where “2+2=4” is white supremacy, you’re free to buy any CRT math textbook you want. You just cannot force Florida taxpayers to subsidize this indoctrination.”

While neither DeSantis nor Youngkin received any monetary donations from Carlyle or Accelerate during their respective gubernatorial campaigns, and it is unclear how much a company that owned a book publisher would stand to profit from being approved in Florida (to say nothing of neither governor being able to profit), Twitter users aren’t doubting the conspiracy.

“Not so much a conspiracy theory as part of a consistent pattern,” one user replied to the thread. “There is always a financial angle to their ‘crusades’.”