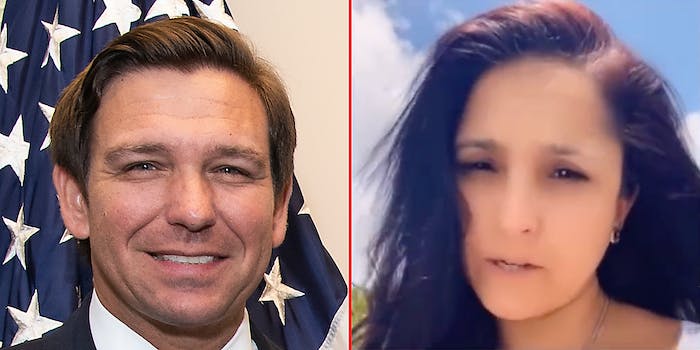 It's an interesting choice.

On Friday, Florida Gov. Ron DeSantis announced a bill that would allow parents to sue schools for teaching critical race theory. Florida’s Republican governor reportedly introduced the legislation alongside a woman who believes the QAnon conspiracy theory and has promoted content from the Proud Boys.

The Stop Wrongs Against Our Kids and Employees Act, or Stop W.O.K.E. Act, is DeSantis’ latest effort to ban teaching United States history through a lens that includes racism, otherwise known as critical race theory. Public schools in Florida say they don’t teach the theory, but that hasn’t stopped DeSantis from crusading against it.

The Stop W.O.K.E. Act is the latest iteration of his campaign against critical race theory.

At the press conference announcing the legislation, DeSantis was joined by the head of the Miami, Florida chapter of Moms for Liberty, Eulalia Jimenez-Hincapie.

According to Miami Against Fascism, Jimenez-Hincapie has promoted the QAnon conspiracy theory that a global cabal of satanic pedophiles controls the world. She’s also reposted the far-right extremist Proud Boys doxing people, the group reports.

After the press conference, Miami Against Fascism tweeted a thread detailing Jimenez-Hincapie’s purported beliefs. In an Instagram story it linked to, she references “children smuggled in underground tunnels for the enjoyment of demons,” a belief common among QAnon followers, who are obsessed with pedophilia.

In the post, Jimenez-Hincapie also claimed that the COVID-19 vaccines are “poison” and expressed transphobic sentiments.

Other posts the group includes show her talking about the “great awakening” on Instagram. QAnon followers often reference the great awakening.

The organization staunchly opposes masks and vaccine requirements, a belief that is shared by, though not exclusive to many QAnon followers. It’s also come out against critical race theory.

Miami Against Fascism tweeted screenshots of her “sharing in Telegram doxxes from the Miami Proud Boy[s] of school board meeting attendees, journalists, and local activists.”

One of the purported doxes refers to someone the Proud Boys claim is with Miami Against Fascism as a “mutant,” a homophobic slur, and “one of the beta pansies.”

“Not shocking at all its an immigrant LGBTQ member,” Jimenez-Hincapie reportedly commented, “…don’t worry, we will keep you in our prayers when Karma catches up to you. Get help.”

Per Miami Against Fascism, Jimenez-Hincapie is also the leader of another group that’s posted anti-LGBTQ content.

Neither Moms for Liberty Miami-Dade Chapter nor DeSantis immediately replied to a request for comment sent Wednesday afternoon via email.