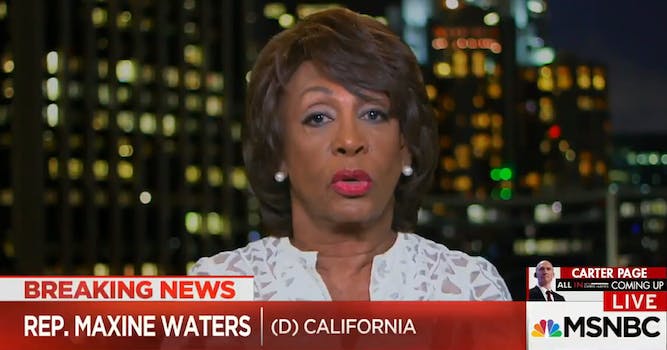 Democrats ramp up calls for impeachment after Trump fires Comey

Rep. Maxine Waters (D-Calif.), during an interview with Chris Hayes on MSNBC, said impeachment was a possibility.

“I said all along he would lead us to impeachment, and he’s doing just that,” she said. “Every day more and more is unfolding.”

Waters also seemed to imply that the investigation into Trump’s campaign ties with Russia was not moving quickly enough.

“We’re fittiling while Rome is burning,” she said. “This president needs to be impeached. I believe that.”

"I think he can be looked at and perhaps even charged with obstruction of justice."

“Impeachment will happen if [a] handful of Republicans in Congress join Dems to put country above party. Or in 2019 after Dems win the House,” Rep. Jared Huffman (D-Calif) tweeted.

Rep. Hakeem Jeffries (D-N.Y.) also questioned Trump’s firing of Comey—and turned around the “Lock Her Up!” chants frequently heard at his rallies during the election campaign against Hillary Clinton.

“Evidence of Trump’s effort to obstruct justice continues to emerge. Lock HIM up?” Jeffries tweeted.

The recent comments come on the heels of more impeachment talk earlier this week.

On Wednesday, several House Democrats said Trump’s decision to fire Comey—in the midst of an FBI investigation into possible ties between his campaign and Russia—put the president on a path toward impeachment.

Rep. Marc Pocan (D-Wis.) spoke about the possibility of impeachment during a conference call organized by the Progressive Change Campaign Coalition.

“We’re seeing Democrats and Republicans concerned with [the] timing of this decision … We need to keep every tool available to make sure president follows the law,” he said.

Rep. Ruben Gallego (D-Ariz.) added that there was “a lot of runway” before impeachment, but by firing Comey, Trump was “not helping himself.”

“We don’t have the numbers to do something right now, but when it comes to a point when we feel there is no other recourse, you’d have—I think —we’d have the full support of the Democratic caucus,” Gallego said.