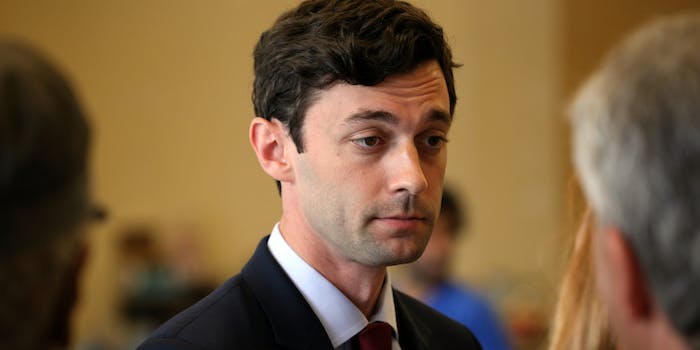 Tuesday's narrow defeats weren't a 'moral victory.' They were a normal one.

President Donald Trump wasted no time in boasting about Tuesday’s GOP victory in the Congressional special elections. Karen Handel, Georgia’s former secretary of state, defeated Democratic challenger Jon Ossoff for the seat in the state’s 6th Congressional District. Although the race was expected to be a nail-biter, Handel won by four points. Just as the election was called for the Republican candidate, Trump tweeted, “Fantastic job, we are all very proud of you!”

“Democrats would do much better as a party if they got together with Republicans on Healthcare, Tax Cuts, Security,” the POTUS would add on Wednesday morning. “Obstruction doesn’t work!”

Ossoff’s loss has led to crowing from Republicans and considerable hand-wringing from Democrats, confused about how they went 0-4 in special elections during the era of the #Resistance. But to focus so narrowly on winning at the expense of the bigger picture is Trump’s game. The most important takeaway from Tuesday’s results is that they were much closer than they probably have been in a district that wasn’t intended to be all that competitive. Tom Price, who vacated the Georgia 6th seat after being tapped as secretary of the Department of Health and Human Services (HHS), won by 23 points in November. Ossoff, a political novice, closed the gap by 19 points.

That follows a trend of Democrats strongly outperforming to expectations in some of the most solidly conservative areas of the country. These districts were never supposed to be in play at all, and yet a 30-year-old political newcomer looked like an upset victor until the final minutes of the election. That’s not the victory the left wanted after the shocking outcome of Nov. 8, but it’s the one they got.

The four special elections held so far this year in Georgia, Kansas, Montana, and South Carolina have one thing in common: The Republicans were playing on their own turf. One of the reasons that Price was selected to lead Health and Human Services, as New York magazine notes, is that his district was considered home field advantage for the GOP, safe from being flipped.

That’s not exactly what happened. Ossoff was just the latest Democrat to put up a fight in conservative strongholds. Rob Quist, a folk singer who received almost no backing or support by the national Democratic Party, came within six points of his widely favored opponent, Republican Greg Gianforte. Ryan Zinke, appointed Secretary of the Interior earlier this year, trounced Denise Juneau by nearly 16 points in November. Quist bested her by 10 points.

Apologists for the Republican Party might say that Gianforte body-slamming a reporter just hours before the election makes this race a difficult litmus test, but the consistency is unmistakable. Kansas’ Ron Estes, who didn’t assault anyone, won by less than 7 points on the same day that Ossoff conceded defeat. The man whose seat he was filling, CIA Director Mike Pompeo, destroyed his liberal opponent during the 2016 election—winning by a nearly 32-point margin. Democratic nominee Hillary Clinton lost Kansas by just under 22 points in November, and that particular district by 27 points. These are major gains.

Ossoff’s race was even closer than those contests. A survey from the Cook Political Report, a nonpartisan online newsletter, found that the documentary filmmaker turned candidate topped the 6th district’s “partisan lean,” a measurement of where voters fall on the political spectrum, by six points.

These elections were considered crucial for Democrats for a number of reasons. First, they were viewed as a symbolic referendum on the nascent Trump administration. A shocking upset loss in a red state like Georgia would have been viewed as a clear rebuke to Trump’s agenda, which most recently includes gutting the Affordable Care Act with a secret bill whose contents have been closely guarded by the Senate. That didn’t happen. But these elections were as viewed as instrumental in making the gains necessary to flip the House Democratic in next year’s midterm elections. The Democratic Party only needs to win back 24 seats. It didn’t appear to get closer to that goal Tuesday.

Except that it did. Pundits have noted that Democrats will need between a six- and seven-point swing in the 2018 congressional races in order to take over the lower legislative body. The four liberals who have run thus far have more than achieved that goal—and it’s one likely to yield more tangible results in districts that aren’t so dominated by the GOP.

And really, all the Democrats have to do next year is to perform slightly better than the average. A Vox survey found that for administrations following World War II, the sitting president’s party loses 22 seats in the House.

While Tuesday’s results weren’t optimal, Democrats are doing much better than that baseline. In the case of Kansas, Democrats haven’t had that strong a showing in the 4th Congressional District in more than two decades. A liberal hasn’t won in South Carolina’s 5th district in 11 years, and in the intervening races, the Republican candidate has won by an average of almost 17 points. On Tuesday, Democrat Archie Parnell, a former tax attorney for the U.S. Department of Justice, lost by just three points.

How Democratic voters view Tuesday’s results will likely come down to whether you’re the kind of person who sees the glass half full or someone who throws it to the ground and complains that you wanted milk. But contrary to the assertions of pundits like CNN’s Chris Cillizza, this isn’t a “moral victory.” It’s a normal one. If victory was never really in the cards, the left needed to show that it could compete in a radically shifting political environment. It did that.

After the 2016 election, talking heads, pollsters, and politicians spent months trying to figure out how Clinton had lost an election she actually won. Despite hacks from the Russians, frequent inquiries into Benghazi, and the late-breaking announcement of the email investigation, she still beat Trump by three million votes. Now the Democratic Party finds itself in a similar position. These very good results are being branded as a “wake-up call” for Democrats, as well as a sign that its platform is “conventional, incremental, are not very different, frankly, from our proposals from 10 years ago,” as California Rep. Ro Khanna said of his party.

Neither of these things are totally inaccurate. Democrats, beset by infighting between progressives and moderates since the 2016 election, have a lot of work to do toward building a real movement in 2018. But when even the party’s successes are branded as yet another failure, just about everything is going to look like a disappointment.