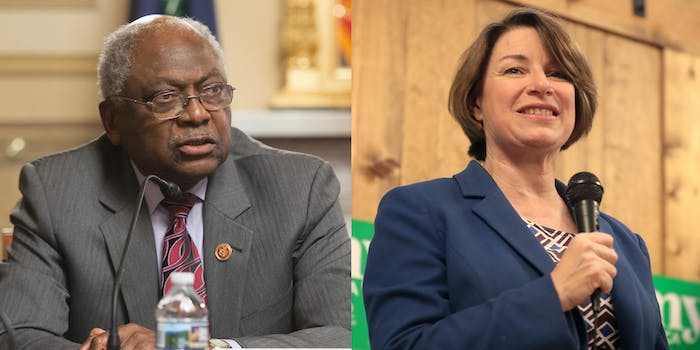 The bill may have a better chance at passing with Democrats in control of Congress.

Two prominent Democrats will reintroduce legislation today aimed at closing the country’s digital divide that had previously been lauded by public interest advocates.

House Majority Whip James Clyburn (D-S.C.) and Sen. Amy Klobuchar (D-Minn.) will reintroduce the “Accessible, Affordable Internet for All Act,” a bill that would allocate $94 billion to expand broadband infrastructure and get more Americans online, according to several reports.

Clyburn and Klobuchar had previously introduced the bill last year, which was praised by numerous tech advocates who said it would help close the digital divide, which is the gap between Americans who have access to affordable high-speed internet and those who don’t.

Amid the coronavirus pandemic—with people relying on the internet to work and go to school—the digital divide has been on full display, with images of students using Wi-Fi in fast food parking lots showing just how stark the issue is.

The “Accessible, Affordable Internet for All Act” would use money to build broadband infrastructure in rural and tribal areas and provide internet access to low-income areas, according to the Washington Post. If providers use this money to build out networks, they would be required to offer affordable plans to consumers.

It also allocates money for the Emergency Broadband Benefit, which would give eligible Americans a $50-a-month subsidy for discounted broadband service.

The bill also pushing funding into the E-Rate program, which helps schools and libraries buy Wi-Fi hotspots, according to the Hill.

The previous version of the bill passed in the House of Representatives as part of a larger package last year, but never came up for a vote in the Senate. With Democrats controlling both chambers of Congress, it makes the passage of the bill more likely.

The reintroduced version once again earned praise from tech advocates.

“The bill’s affordability measures are crucial, even though the bulk of the spending in an infrastructure bill naturally goes to constructing new networks. The majority of people disconnected today are offline not because they can’t find broadband in their neighborhoods but because they can’t afford the cost,” Matt Wood, the vice president of policy and general counsel at Free Press Action, said in a statement. “This affordability gap disproportionately impacts communities of color facing systemic discrimination and economic injustice.”