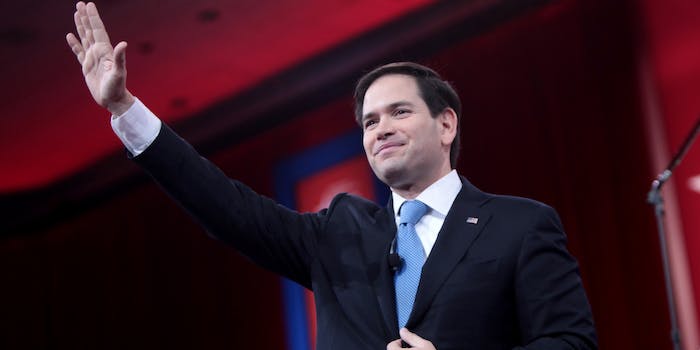 The Sunday night premiere of Game of Thrones season 5 wasn’t just a television event. It was also an opportunity for brands to use themed advertisements to grab people’s attention. But the best Game of Thrones-related tweet during last night’s premiere came not from a company, but from a soon-to-be presidential candidate trying to gin up excitement for his campaign.

Sen. Marco Rubio (R-Fla.) plans to announce his campaign at 6pm ET on Monday. Although former Secretary of State Hillary Clinton‘s Sunday announcement was still the top story, Rubio wanted in on the attention as well. So he tweeted a Game of Thrones-style tease: “Big News is Coming.”

.@marcorubio: He reaches for water, but we're breaking out the Arbor red. pic.twitter.com/O6ATmGumkE

The Democrats’ response incorporates a house slogan that parodies a heavily mocked Rubio moment, plus a reference to Arbor red, one of the most popular wines in the Seven Kingdoms.

Perhaps the word “thirst” is also a reference to Rubio’s attempt to grab the national spotlight. The move did appear to some to be a bit thirsty.

This tweet was actually part of a series of Game of Thrones-style attacks on current and likely Republican presidential candidates that the DNC rolled out during the premiere.

The GOP contenders can’t hide from who they are — but when they play the Game of Votes, they'll either say or do anything to win.

Not even the Iron Bank of Braavos could afford a 24 billion gold dragon government shutdown. pic.twitter.com/JYOjAC70uG

You think you can beat the white walkers just because you took on some teachers? You know nothing. pic.twitter.com/i6Nj2w6FTu

Time for some traffic at the Twins. pic.twitter.com/dCfCyK6TSY

His own man? More like “President Bush, the third of his name.” pic.twitter.com/qEKAxZh1LR

There's Robert Baratheon, Stannis Baratheon, and… who was that third one again? pic.twitter.com/7KOSfIBZDn

By saying one thing and doing another, he's about as honest and trustworthy as Littlefinger. pic.twitter.com/UhcKAa9Kmo

Note the reference here to trustworthiness, which Paul has made a central tenet of his early attacks against Clinton.

If he gets his way, the next great dynasty of Westeros will be Duck. pic.twitter.com/8aK5IQOh0W