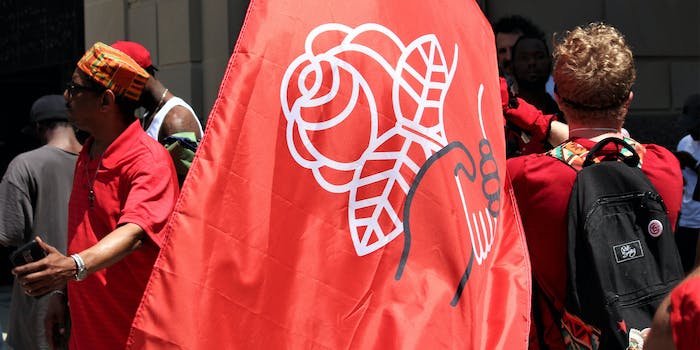 How will the Democratic Socialists handle antifa?

The organization walks a fine line.

With the increased violence of neo-Nazi and far-right groups and talk of crackdowns on antifa activists by President Donald Trump’s White House, anti-fascist organizing has become a much-discussed and debated topic in left-wing circles.

At the Democratic Socialists of America (DSA) National Convention, held in Atlanta over the first weekend of August, anti-fascism turned out to be one of the most hotly contested items on the agenda.

DSA, the largest socialist organization in the United States, has grown from 5,000 to 60,000 members in the last three years. This convention drew a level of attention that would have been unthinkable a few years ago, including a feature in the New York Times and live coverage from CNN.

For the most part, the convention passed the sort of resolutions you might expect with large majorities. The delegation affirmed its support of Sen. Bernie Sanders’ (I-Vt.) presidential candidacy, the Green New Deal, developing ties with labor unions, open borders, and a host of other leftist priorities.

One vote was surprisingly close. Resolution 9, which called for the creation of a national anti-fascist working group, passed narrowly.

(Editor’s note: Brenden Gallagher is a member of DSA Los Angeles but was not a convention delegate and took no position on Resolution 9.)

This surprised some, as DSA says it is committed to anti-fascism. But those more familiar with the issue understand that though activists on the left stand against fascism, there is a lot of debate as to how to most strategically fight against it. It has been tricky for DSA to figure out exactly how to engage in anti-fascism. Anti-fascism is a coalition effort; groups with diverse tactics and backgrounds identify as anti-fascist.

Coalitions include far more than just black bloc activists (the term for the subset of anti-fascist protestors who dress in black, cover their faces, and are more often open to view violence as a viable tactic), which the press usually describes as “Antifa.” Antifa is just shorthand for anti-fascists working as a part of the decentralized, left-leaning groups directly confronting fascism.

This diversity makes it difficult to have a blanket policy on how to engage. Should physical confrontation be on the table? Should activists work anonymously? Can every group ensure the safety of its members?

And some anti-fascist activists may not even identify as Antifa.

So what should go in the rulebook? It’s caused tensions.

On one hand, many in DSA want to stand with their coalition partners against fascists, bringing DSA logo flags and T-shirts to anti-fascist demonstrations and using DSA’s organizing tools for actions. Other activists want to protect themselves from the doxing, violence, or legal action that comes from organizing against the far-right.

Activists, journalists, and organizers who have stayed away from street clashes have still found themselves targets. Groups like Patriot Prayer and the Proud Boys are doxing anti-fascist activists online, and some report they are showing up at their homes.

The tension between these two points of view has led to organizational challenges for DSA. For example, DSA raised money for survivors of the violence during the Unite the Right rally but then had trouble effectively distributing the funds. Some members blamed this on a lack of an effective strategy for engaging in anti-fascist work.

DSA is not the only group to have these challenges. Anti-fascists of all stripes struggle with how to confront fascists while protecting those who attend protests.

The wording of Resolution 9 seemed simple enough, coming in at just over 100 words.

“Be it therefore resolved, DSA will create a national working group dedicated to antifascist organizing, tasked with the following duties:

Be it finally resolved, the National Antifascist Working Group will have a process for interested DSA members to apply and join, that will assess whether they jeopardize the security of the other group members or the antifascist community at large.”

The resolution only required a simple majority vote.

The resolution only required a simple majority vote, designed to establish a working group that would handle anti-fascist response and planning in DSA.

Despite this straightforward language, there were plenty of concerns around the issue that needed to be hashed out in Atlanta. The Daily Dot spoke with a number of convention delegates about the resolution and how it speaks to the complexities of anti-fascist organizing in the age of Trump.

The Daily Dot granted anonymity to activists who wished for it, as anti-fascist activists have been the targets of right-wing groups and the U.S. government.

Chris, a DSA member from the Pacific Northwest, explained his support of Resolution 9, saying, “If we are to call ourselves socialists, we must by definition be explicitly opposed to fascism. There’s no excuse for pretending that DSA has no role to play in anti-fascist organizing.”

Socialism and fascism are naturally opposed ideologies, and they have historically had tense conflict. Fascism is an authoritarian system that suppresses opposition by amassing dictatorial strength around the superiority of nation and/or race. Socialism involves the working-class ownership of the means of production and requires equality.

Fascism is an inherently top-down system; socialism is a bottom-up system.

Ben, who supported the resolution at the convention, had similar sentiments. He said, “The largest socialist organization in the U.S. has a moral obligation to openly support anti-fascism and protect those targeted by fascists.”

But Michael Gonzales, a delegate from DSA’s North Texas Chapter, didn’t find the question so simple. He went back and forth on the resolution before ultimately supporting it. For him, doubts arose when colleagues expressed that they were “concerned about the operational security issues that could potentially get comrades doxxed or otherwise harassed should a security breach happen.”

This fear is very real, as right-wing groups in Portland have been known to physically unmask anti-fascist activists in order to photograph and dox them. Members of the white nationalist group Patriot Prayer have also attempted to “crash” DSA and Industrial Workers of the World (IWW) meetings in Portland.

Right-wing extremists have also tried to dox anti-fascist activists online, according to reporting from the Intercept.

Gonzales added, “One of the most important considerations is… making sure that marginalized comrades arenʼt going to disproportionately bear the brunt of harassment when an action is in process, or in their everyday life while simply organizing.”

Ben agrees with these concerns. He adds that it is important, “first, that no one is asked to engage in risks they are uncomfortable with, and second, that the primary goal of this work is protection of the people targeted by fascists, rather than any glorification of violence, revenge-seeking, or personal vendettas.”

Evan, a member of DSA’s Portland chapter, supported the resolution more strongly after it was amended prior to the convention.

The amendment “focused the purpose of the [working group]. The purpose of this new working group is to provide resources from chapter to chapter about how to do anti-fascist work and be aware of what fascists are doing, what communities fascists are targeting. [The amendment clarified this] is not a coordinated anti-fascist action planning committee.”

This was a common theme in the sources who spoke with the Daily Dot. Those for and against had a concern that an anti-fascist effort is more holistic than simply planning street confrontations with alt-right and neo-Nazi groups.

Evan added, “The most important considerations when opposing fascists are how you effectively cut off their ability to march or congregate unopposed. The police in most communities will gladly roll out free speech protections for Nazis and white nationalists, and anti-fascist action is meant to make the fascist’s work more difficult.“

A number of delegates present at the convention told the Daily Dot that the Portland, Oregon, chapter was particularly powerful in its support of the resolution because of the sheer amount of far-right and Proud Boy activism that takes place there.

Most recently, the Andy Ngo “milkshaking” incident occurred during a white nationalist event and antifa counter-protest in the city. At that event, Ngo was assaulted and had a milkshake thrown on him. A number of right-wing outlets and pundits spread unfounded conspiracy theories that the milkshakes contained quick-dry cement or acid.

Evan echoed this, saying, “We have plenty of anti-fascist groups in Portland willing to be on the frontlines. But for anti-fascists within DSA, most of whom are new to this, we form a civilian contingent that supports those on the front lines while staying out of the main milieu. … We never ask anyone to do more than they’re comfortable. “

The complexities and nuances of the issue rendered the resolution simply too spare for some.

A delegate who spoke to the Daily Dot anonymously said, “I voted against it, just because I found the analysis of the resolution itself under-considered and implied a lack of real understanding of fascism. In order to combat fascism, we all to interrogate the reasons why fascism is on the rise locally and internationally.”

This delegate wanted more understanding that anti-fascism needs to include political education. They added, “because [antfascist organizing] increases the nature of [DSA] as a target, you have to be incredibly smart on this stuff.”

With Resolution 9’s narrow passage, DSA affirmed support for anti-fascist activism, but it is clear that this is the first step in a process of building out its actual efforts. One of the resolution’s authors spoke with the Daily Dot, and they admitted that “for this working group to function properly, it must be implemented carefully and wisely by DSA National.”

They added, “By working with a well-respected organization like DSA, we hope to introduce the tenants of anti-fascism to more people, and to help them to defend their communities from the fascist creep.”