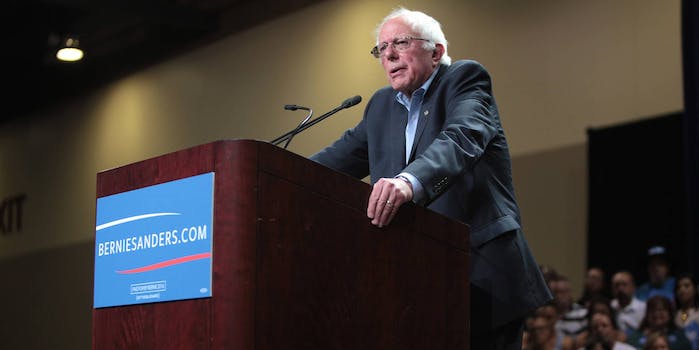 The race was tight on Tuesday, as expected, but Sen. Bernie Sanders came out on top in Rhode Island’s Democratic primary, beating out former Secretary of State Hillary Clinton by nearly 16 points.

Of the five states voting on Tuesday, which also includes Connecticut, Pennsylvania, Maryland and Delaware, pollsters predicted Sanders had the best chance of winning in Rhode Island.

Clinton has won Maryland, Pennsylvania, and Delaware. Connecticut’s returns were still coming in at the time of publication, with Sanders holding a 3-point lead over Clinton in the state.

Among Tuesday’s primary states, Rhode Island is the only one that allows unaffiliated voters to cast ballots in a party primary. Sanders popularity among independents means Rhode Island’s primary system likely helped him.

“Rhode Island is tailor-made for Bernie Sanders,” said Matthew McDermott, Senior Analyst at the polling firm Whitman Insight Strategies. “It’s got all the ingredients that have propelled him to victory in other primaries so far, the ability for unaffiliated voters to participate, a disproportionately high percent non-college white men, and a lower percent of African-American and Latino voters.”

Rhode Island doles out 24 delegates, which are awarded proportionally based on percentage of the vote. The win will most likely not help Sanders win the nomination, which would require mathematically improbable victories for Sanders between now and the final contests in June.

“Even if Sanders pulls off a win in Rhode Island, it’ll be nearly impossible for him to net the margin needed to remain on track for the nomination,” McDermott concluded in an analysis posted on Medium prior to the vote. He went on to cite Nate Silver, who calculated that in order for Sanders to reach 2,026 delegates—the number needed to secure a delegate majority over Clinton—he’d have to beat Clinton in Rhode Island by 33 points. That will almost certainly not happen.

All contenders will face off again on May 3 for Indiana’s primary.