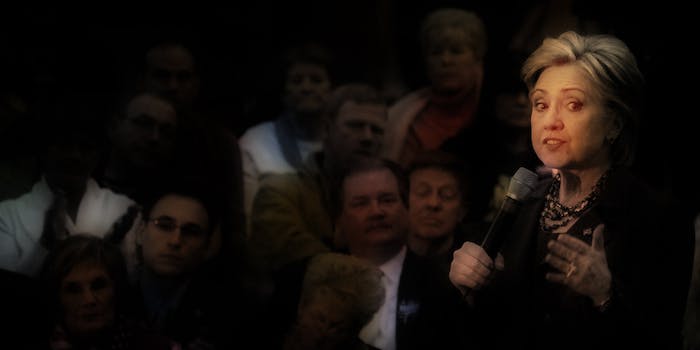 At Democratic debate, Clinton pushes back on ‘progressive’ label

'The root of that word, progressive, is progress.'

One day prior to Hillary Clinton and Bernie Sanders meeting for the fifth Democratic debate of the 2016 election cycle on Thursday, the two candidates sparred on Twitter over which one of them was more progressive.

That battle—a fight to very deliberately draw the boundaries of progressivism, each for their own benefit—was one that continued onstage at the University of New Hampshire. Sanders attempted to define the circle of progressivism as one that excluded the former secretary of state; Clinton charged that, while she and Sanders both exemplified progressive principles, the self-described democratic socialist’s insistence on ideological purity is ultimately harmful to the party.

“Let me start by saying that Senator Sanders and I share some very big progressive goals,” Clinton said to open the debate, responding to a question from moderator Chuck Todd about which policy goals are realistically achievable.

She went on to list her efforts on expanding healthcare coverage, making college more affordable, raising the minimum wage, and enforcing rules about ensuring gender and racial equality when it comes to pay. However, Clinton framed those efforts in the context of what she asserted was realistically achievable to bolster her narrative of being someone who knows how to pull the levers of power to get tangible results at a time when much of Washington is mired in gridlock.

Within seconds of Clinton giving this answer, a Twitter account run by her campaign tweeted the following graphic:

Hope it's fun in that club of one, there @BernieSanders.#DemDebate pic.twitter.com/K8JUYuVySk

She then listed a number of Sanders’s votes in Congress that didn’t seem to toe the progressive line, such as his votes against gun control measures like the Brady Bill and the immigration reform effort led by Sen. Ted Kennedy.

Sanders responded that, on many of the ideas where he decisively breaks with Clinton with a lean to the left (such as supporting a single-payer universal healthcare system and tuition-free college for all Americans), have been successfully implemented in countries across the globe. Therefore, saying they’re unrealistic, isn’t necessarily accurate.

According to a transcript of the debate posted by fleet-fingered writers at the Washington Post, the word progressive, or some variant thereof, was uttered on the debate stage two dozen times. Both Sanders and Clinton fighting to claim an ideological mantle is something that largely hasn’t happened on this side of the aisle since mainstream Democrats largely abandoned wearing the “liberal” label on their lapels in the 1990s.

Instead, swap progressive for conservative, and Thursday night’s showdown sounded a lot like the Republicans.