Who won the first Democratic debate?

They came. They saw. They bickered over campaign finance reform.

Who won the first Democratic debate of the 2016 election cycle?

Either Bernie Sanders or Hillary Clinton, depending on which first-reaction metric you believe.

Sanders, the straight-talk independent senator from Vermont, walked away from the CNN stage with the win, a variety of Web-based metrics show. The pundits, on the other hand, have stacked the win firmly in Clinton’s corner, putting the narrative of Sanders’ victory in question.

… and this is how the #DemDebate candidate rankings stand at the end of the debatehttps://t.co/28tOS8mPXp pic.twitter.com/yiJhiZSZ20

Sanders also dominated a poll from the right-leaning Drudge Report, which gave Sanders a commanding 37-point lead over Webb, at the time of publication.

And on Facebook, “Bernie Sanders” trended one spot higher than “Hillary Clinton” in the hour after the debate, which itself took the top-trending spot. The hashtag #DamnEmails, a reference to Sanders’ condemnation of Republicans’ focus on Clinton’s private email use during her time as secretary of state, came in a close fourth. 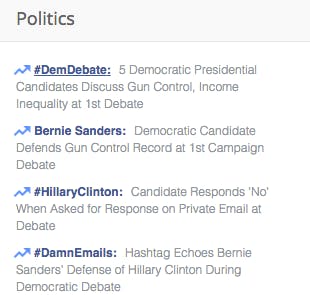 Sanders also reigned supreme on Twitter, clocking in more mentions than any other candidate on the stage.

Meanwhile, Donald Trump, the businessman and GOP frontrunner, still managed to make his mark during the Democratic debate—coming in third in overall Twitter mentions.

Top candidates (either party) mentioned on Twitter during #DemDebate so far:

Despite Sanders’ clear victory online, many of those tasked with pontificating on the candidates’ debate performances counted Tuesday night as a win for Clinton. The Guardian, New York Magazine, and Bloomberg all crowned Clinton the winner.

Considering that we are more than a year away from Election Day, however, it remains to be seen how much these quick-poll reactions will matter in the long run.

Correction: Sanders’ lead in the Drudge Report poll was 37 points.