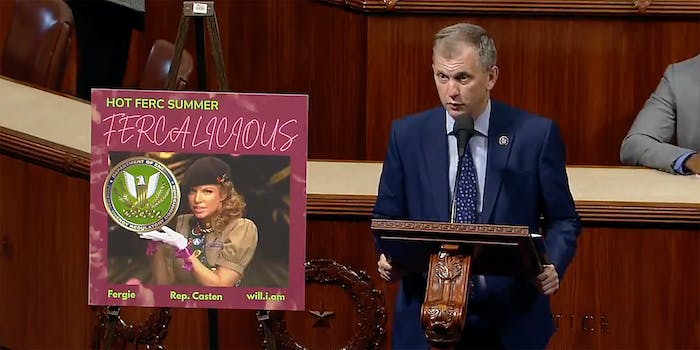 ‘This is so dorky that I’m now a fan’: Democrat parodies ‘Fergalicious’ to promote climate change legislation

Politics is a serious business. As the average temperature rises and storms increase in intensity and frequency, climate change has become one of the most pressing issues facing today’s lawmakers.

One Democrat congressman decided to inject some humor into the conversation. Now he’s going viral for bringing up the rising heat with his sick beats.

Speaking on the House floor, Casten began, “I rise to continue our celebration of ‘hot FERC summer.’ As climate activist Fergie would certainly say, the FERC-alicious definition is to make our planet cooler.”

“Having a well air-conditioned home when it’s ‘hot, hot,’ that’s FERC-alicious, getting your electricity from the lowest cost reliable source—FERC-alicious—an electric transmission system that keeps everything from electric vehicles to steel mills running with zero-carbon electricity, FERC-alicious,” he continued.

“With record setting heat waves already causing deadly droughts, wildfires, and overwhelmed power grids, we’ve run out the clock and must transition to a clean energy economy. And we need FERC’s help.”

The speech/rap was clearly delivered with the hopes of drawing attention to legislation Casten subsequently introduced that’s aimed at speeding up FERC’s response to requests to rehear orders on its decisions.

Casten concluded with a parting reference to “Fergalicious.”

“And now I yield back so I can go work on my fitness,” he said.

While his legislation remains pending, “FERCalicious” has turned heads online. As of this writing, the clip that Democrat consultant Tim Hogan tweeted is approaching 700,000 views.

Casten is earning praise for creativity, fearlessness, and even his rapping ability.

“He nailed the intonation,” Hogan commented.

Many felt that Casten had accomplished the near-impossible task of getting people to pay attention to FERC.

“In all seriousness, silly stuff like this is probably the best method of outreach. Not many people watch CSPAN, but 21,000 people have watched this clip and now they probably know what the FERC is lol,” tweeted @tatianacoronel_.

This isn’t the first time Casten rapped about FERC in Congress. Last week, he delivered a shorter parody of Megan Thee Stallion’s “Hot Girl Summer” as he declared that this is “hot FERC summer.”

That clip didn’t generate nearly as much attention as “FERCalicious,” however.

Casten hasn’t wasted any time capitalizing on the his moment of internet fame. He’s selling t-shirts and has asked for suggestions for which song he should parody next to promote his FERC legislation.

Time will which of the many excellent suggestions Casten chooses.