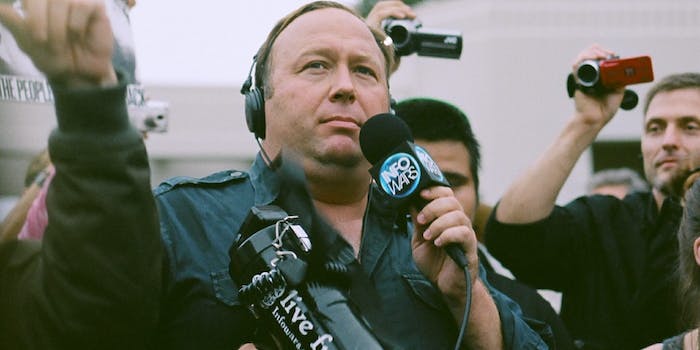 Social media is allowing the theory to spread.

After an Amtrak train carrying congressional Republicans to an annual party retreat in West Virginia crashed into a garbage truck on Wednesday, killing one and injuring several others, it didn’t take long before wild conspiracy theories began to surface online among the political right.

InfoWars personality Alex Jones was one of the first to peddle the idea that the truck was a ploy by Democrats to “derail the Trump train” and distract from the president’s State of the Union address.

In a segment from his InfoWars show, Jones continued to push the theory that the truck collision was a deliberate act of sabotage.

The New York Times reported Wednesday that the truck involved in the crash belonged to Time Disposal, a waste and recycling collection company, and that the trucks’ passengers have not been identified. The National Transportation Safety Board is investigating the crash.

Jones quickly connected the incident to the shooting incident from July in which a lone gunman opened fire on lawmakers at a Republican congressional baseball practice in Alexandria, Virginia.

The conspiracy theory quickly propagated and evolved across social media as it found wider audiences on several platforms.

On YouTube, according to a Fast Company report, Jones’ live stream coverage of the incident turned up first on search results while the third video alleged that the crash was an “attempted assassination”—a conspiracy narrative picked up on 4chan’s /pol/ message board, known for its unapologetic and extreme right-wing humor, to mixed reception.

Fast Company criticized YouTube and reflected that the company needed to “rethink how it prioritizes uploaded videos.” YouTube did not respond to the publication’s request for comment.

Meanwhile, on Facebook—a platform that has been put under pressure to tackle fake news and disinformation—numerous links promoted the “Democrat dump truck” conspiracy theory.

One featured post linked to an ABC News article and questioned: “how Hillary [Clinton] still has the power to order these kinds of strikes”—as if the crash were a military attack. Another post linked to a Daily Caller article promoting the conspiracy.

Just on Monday, Facebook CEO Mark Zuckerburg promised, “a series of updates to show more high quality, trusted news.” While these updates may still be in the works, many are taking the explosion of this conspiracy theory as proof of the outstanding problem.