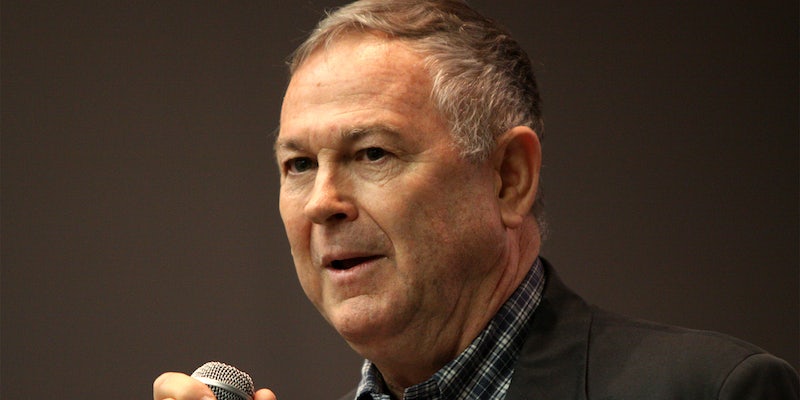 The former congressman wholeheartedly embraced the 'Stop the Steal' movement.

Former Rep. Dana Rohrabacher, of California, has been identified in a video of the Capitol riot on Jan.6, 2021, by a group of online researchers known as the @capitolhunters.

In a thread posted on Twitter, Rohrabacher is visible in two different videos on the Capitol grounds during the riot, and in a third video, walking in a public area, hours prior.

There is no evidence that Rohrabacher entered the Capitol, or engaged in any violence, but he is clearly visible in restricted areas.

Rohrabacher’s involvement with the “Stop The Steal” movement, which falsely states that President Joe Biden is not the duly elected president of the United States, dates back to at least December 2020.

During that time, he participated in a rally with alleged Capitol insurrectionist Alan Hostetter, the former police chief of La Habra, California, who was recently arrested by the FBI.

At one rally, Rohrabacher stood by Hostetter as he called for the execution of Trump’s political opponents.

“The enemies and traitors of America, both foreign and domestic, must be held accountable,” Hostetter said, according to Mother Jones. “And they will. There must be long prison terms, while execution is the just punishment for the ringleaders of this coup.”

Rohrabacher served 15 terms in Congress before Rep. Harley Rouda (D-Calif.) ousted him in 2018.

He was also mentioned by House Minority Leader Kevin McCarthy (R-Calif.) as someone who Russian President Vladimir Putin “pays,” according to a recording of a 2016 House leadership conversation.

Rohrabacher did not respond to a request for comment at the time of publication.