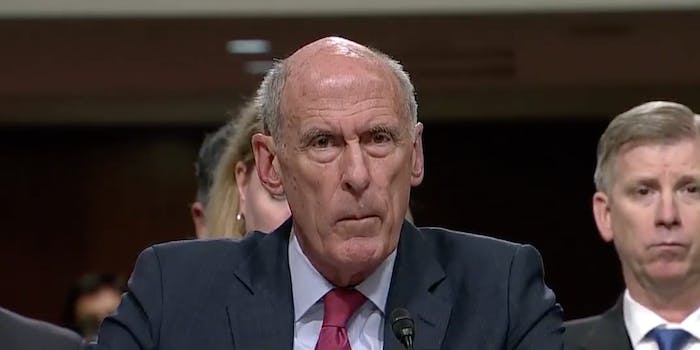 Trump reportedly asked the DNI and NSA to help push back against the FBI's Russia investigation.

Director of National Intelligence Dan Coats refused to reveal whether President Donald Trump attempted to convince him to push back against an FBI investigation into possible collusion between the Trump campaign and Russia’s government.

On Monday, the Washington Post reported that Trump asked Coats and National Security Agency Director Adm. Mike Rogers to publicly deny any evidence of collusion between the Trump team and Russia after former FBI Director James Comey disclosed the Bureau’s “ongoing investigation” into Russia’s attempts to influence the 2016 election during a March 20 House Intelligence Committee hearing.

Sen. John McCain (R-Ariz.) asked Coats during Tuesday’s Senate Armed Services Committee hearing whether the Post report was an accurate portrayal of a conversation with Trump, but Coats deferred.

“As the president’s principal intelligence adviser, I’m fortunate to be able and need to spend a significant amount of time with the president discussing national security interests and intelligence as it relates to those interests,” Coats said. “We discuss a number of topics on a very regular basis. I have always believed that given the nature of my position and the information that which we share, it’s not appropriate for me to comment publicly on any of that.”

Coats added: “So, on this topic as well as other topics, I don’t feel it’s appropriate to characterize discussions and conversations with the president.”

Coats responds to report Trump asked him to push back against FBI's Russia probe: Not "appropriate to characterize discussions" w/president. pic.twitter.com/pz1bJmHMWM

In early January, the U.S. intelligence community released a report that concluded the Russian government, led by orders from President Vladimir Putin, engaged in “influence campaigns” in an attempt to harm Democratic nominee Hillary Clinton’s chances of winning the election against Trump.

Trump fired Comey on May 9, a surprise move that sent the Trump White House into a spiral of controversy. The president said on multiple occasions that the FBI’s investigation into Russia played a role in his decision to fire Comey.

Trump has repeatedly denied any collusion between him or his associates and Russian operatives.