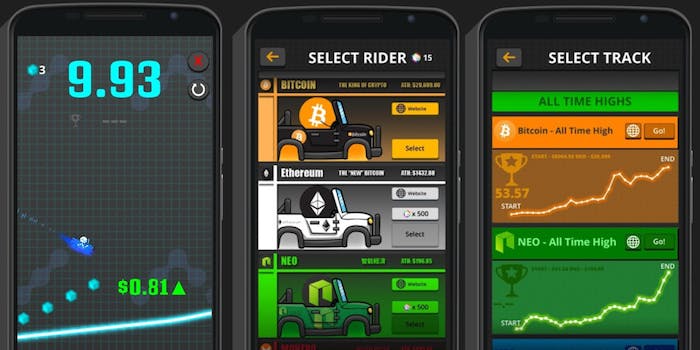 This is probably the safest way to surf the cryptocurrency market.

Whether you’re a full-on crypto fanboy, or the tumultuous peaks and crashes have made you wary of investing in the digital currency space, there is a new cryptocurrency-centric game you can enjoy. It’s called Crypto Rider, and it’s a delightful way to virtually ride the highs (and lows) of the cryptocurrency market.

Crypto Rider is a racing game that lets you ride the actual historical price fluctuations of several prominent cryptocurrencies. Right now, it has 10 different tracks to race on, which include Bitcoin, Neo, and Ripple. It also has nine different cryptocurrency-themed cars you can choose to ride in the game.

The gameplay itself is straightforward. Press down on your phone’s screen to accelerate your car when it’s riding along the track of a cryptocurrency, and if you’re airborne, press to make your car flip in the air. Successfully landing the flip earns you a burst of speed. There are also coins on the course; collecting these coins helps you unlock new cars to ride.

The game has some fun, quirky details. For example, your car’s exhaust is tiny coins, and the logo of the cryptocurrency track you’re on appears periodically in the background. There’s also variety in the tracks themselves—some erratically climb to a peak at the track’s end, some rise and fall like a mountain peak, and others document a currency’s depressing dip from high to low.

The app’s developer, Daniel Fahey, told TechCrunch that he first developed Crypto Rider as a side project. But since the game has had good reception, he still plans to update the app with more tracks.

Crypto Rider is free on iOS and Android. It’s probably the safest way to play the cryptocurrency market—although unfortunately, it’ll never make you a millionaire.