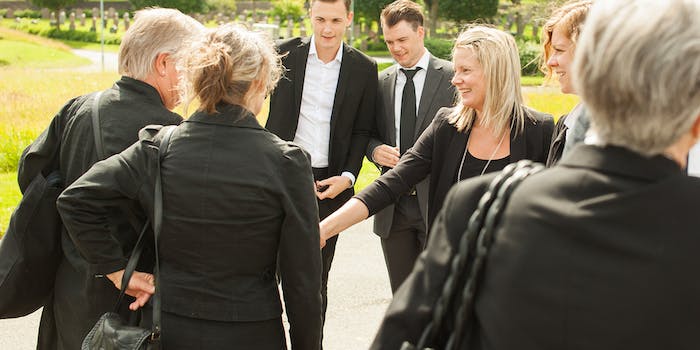 Crowdfunding can help with everything from paying for college to self-publishing a book. So why wouldn’t you use it to give a loved one a proper burial?

When a family member passes away, funeral costs can easily total in the thousands of dollars. According to VICE Magazine, some cash-strapped families are now turning to the generosity of strangers on crowdfunding sites to help out with those expenses.

Sites like Graceful Goodbye and Giveforward are specifically set up for such endeavors, with Giveforward taking on the additional role of helping out with staggering medical expenses.

Truly ambitious grievers, however, take to more popular sites like Indiegogo and GoFundMe to seek out donations toward final expenses. On Indiegogo alone, 17 funerals have been fully funded by generous strangers.

And since this is crowdfunding we’re talking about, there are occasionally incentives that accompany funeral funding! Granted, the incentives are not the traditional ones you would find on other projects. For example, no matter how much you donate, you will not receive a VIP invite to the funeral or a prayer card signed by the whole family.

The family of Tammy Carman, however, is offering personalized video thank-yous to donors who part with $25, and handcrafted kitchen angels to those willing to cough up $50 toward Carman’s $11,692 funeral expense. And if you gift $50 to the funeral of Alex Cameron, you will be giving the gift of “peace” to the family.

Since crowdfunding platforms include the ability to keep backers and curious parties updated throughout the project, some have used this to their advantage. The family of Barbara Sonin, for example, created a GoFundMe page for her funeral expenses while she was still terminally ill. Her passing was noted in an update on the same day. Backers contributed over $11,000 toward the family’s expenses.

Those seeking crowdfunding to take care of funeral costs do not limit it to their human loved ones, either. Ryan Teddy Coleman, for example, began a GoFundMe page to pay for the $120 cremation of his beloved cat, Huey.